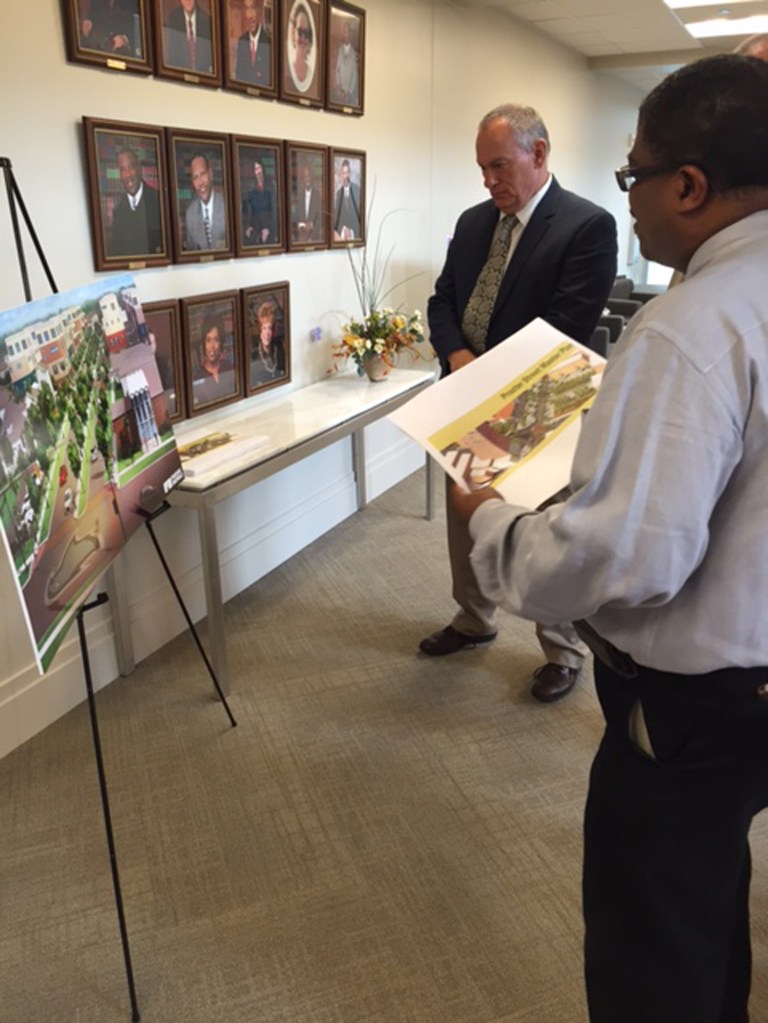 A park geared for children, or one with adults more in mind, was among the topics bounced around Wednesday during a stakeholders meeting.
Held at the newly restored Economic Development Corporation building at 501 Procter St., the meeting was designed to provide a compass to future development of Port Arthur’s downtown area.
Architect Don LaBiche detailed provisions of a Procter Street Master Plan prepared in 2011, while inviting input from those in attendance.
LaBiche said the 2011 plan provided for added landscaping around the Procter Street Pavilion and plans for improvements to People’s Park.
“Right now the pavilion sits on a giant piece of asphalt. We’d like to soften it with landscaping,” LaBiche said.
The LaBiche plan also featured enhancements to the across-the-street People’s Park including a spray park with high rising fountains designed as a centerpiece for the area.
Brick seats would run down the sides of the spray park as well as additional landscaping.
Cuevas Peacock said he believed a park with playground equipment for children would attract people to the downtown area more than one for adults.
“To change the image of downtown Port Arthur we need a kids centered park,” Peacock said.
In addition to the LaBiche plan, a more recent downtown plan developed by Freese and Nichols was referenced as having a children’s spray park in lieu of the expansive water feature.
Because of limited space in People’s Park, which is more of a pocket park, there is not much room for playscape equipment, LaBiche said.
LaBiche said his firm was in the process of developing a master plan for the Rose Hill park that includes a spray park for children, tennis courts, a covered pavilion, and more.
The spray park would be larger than the one in Port Neches, LaBiche said.
“To me, if we are going to create a nice park for kids, it needs to be at Rose Hill,” LaBiche said.
Lawrence Baker, Port Arthur’s director of community services, said there is more than one kind of park.
“When you say “park” people automatically focus on kids, but there are different kinds of parks, such as a place to convalesce and soak in activities,” Baker said.
Whether the spray park is built for children, or more as a statement piece for the new downtown, it will be equipped with covers to use during Mardi Gras. The covers will be used over the spray jets so motor homes can park in the area during Mardi Gras, LaBiche said.
“This will be a signature open space to be used for festivals, farmers markets, and the like,” Shad Comeaux, with Freese and Nichols, said. “It needs to make a statement — to say the downtown is alive, we are back.”
Restrooms for handicapped individuals were among the other ideas introduced during the meeting.
“I agree with having the bathroom space, but not in the park. I would like to keep as much green as possible to let people rub their toes in the grass,” Councilwoman Tiffany Hamilton, said.
Ron Burton, Port Arthur director of developmental services, said the PAEDC has already appropriated $200,000 for the projects. The city will have to make a project presentation for another $400,000 from the EDC to provide a budget of $600,000 for the pavilion and People’s park project.
Email: sherry.koonce@panews.com
Twitter: skooncePANews