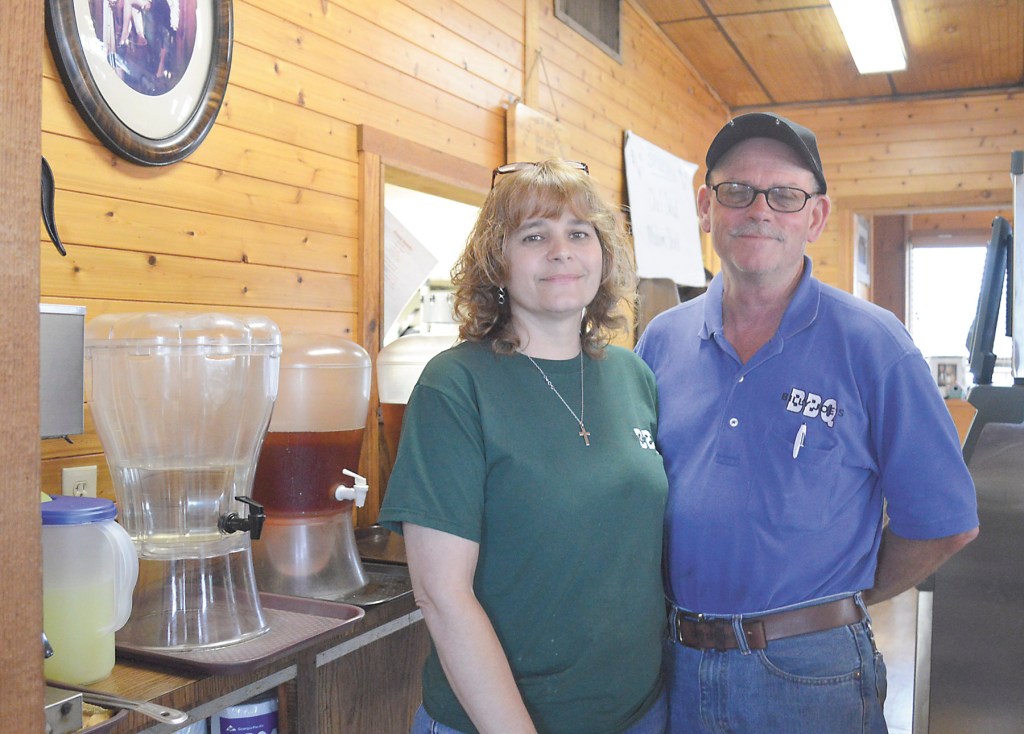 Garry and Brenda Richards, owners of Billy JoeÕs BBQ, were recently named the Small Business Persons of the year for Port Neches.

PORT NECHES — The smell of smoked barbecue fills the dining room at Billy Joe’s BBQ in Port Neches as customers chat over their plates of chipped beef and other specialties.
The decor is simple yet eye catching — a rustic wagon wheel  chandelier hangs from the center of the room and tables feature small bunches of fresh flowers in vintage ice cream glasses.
But it’s not the decor that led to owners Garry and Brenda Richards being named Port Neches Small Business Person of the Year. Brenda Richards speculated that it’s likely the combination of good food and good customer service.
“We don’t have fast food but have fast service,” Brenda Richards said.
There’s a term for this in the restaurant world, Garry Richards added, is “fast casual.”
The couple are keenly aware that many of their customers are generational — grandmothers, their children and their children’s children.
“The kids grow up and bring their kids here,” Garry Richards said. “They’ll come in and pull some tables together.”
Billy Joe’s BBQ also feeds the working crowd often receiving orders for plate lunches at local refineries and businesses in addition to family reunions and holiday specials.
“We feel really blessed to have the customers and staff we have,” she said.
Debbie Plaia, executive director of the Port Neches Chamber of Commerce, said the Richards do a lot for the community.
“They provide a lot of things people don’t really know about,” Plaia said. “Garry’s active in the Nederland-Port Neches Optimist Club and for the last two years have provided food for the special needs carnival session during RiverFest. They are always there (for the community) and don’t really like the credit but we feel they are the perfect small business persons.”
Billy Joe’s BBQ typically employs high school and college students thus allowing them a chance to earn some money and maybe pay tuition.
Billy Joe’s BBQ began in 1973 at the corner of Armstrong and First Street with Billy Joe Butler. Garry Richards worked for Butler while in high school from 1974 to 1978. After college he returned to the business where he took on a larger role. Brenda was working there his second time around and the two married in 1986. When Butler was ready to retire the Richards took ownership in 2000. The current location is 2029 Magnolia Ave.
“We still use the same barbecue rub. The same spice recipe. The same potato salad recipe,” she said. “But we’ve added some new things like fried foods and in the last three to four years have added macaroni and cheese but we’ve kept most of the recipes.”
Technology has helped in the restaurant field by cutting down on the labor intensive barbecuing. A rotisserie wood-burning pit slow roasts briskets for 10 hours.
One thing that has stayed constant through the 43 years of the restaurant’s existence is the cook — Cleo Baltimore. Clad in white pants and shirt with nary a winkle on his face, only the white of his hair hints at his 70-plus years of age.
“I cook the barbecue,” Baltimore said with a matter of fact tone.
As the longtime cook was speaking Milton Perio of Bridge City walked over to greet Baltimore.
“We used to skip school and get lunch at Billy Joe’s,” Perio, a Port Neches-Groves High School graduate said with a laugh.
Even back then people knew Cleo Baltimore.
“We might not have known the name but we knew the man,” Perio said. “I tell you what, I live in Bridge City and stopped by the Harley shop (earlier in the day). Instead of following I-10 home I came by here to get my (barbecue) fix.”
Baltimore’s friendly nature is also known by many. He’s the man who sits outside the eatery and waves at traffic. Then, in the afternoon at his Beaumont home, he waves to that traffic as well.
The Richards said they are grateful for the recognition received as small business persons of the year and grateful for the success of their eatery.
“We both feel that God has blessed us,” she said. “We share our blessings not only with employees but customers through our prices.”
Prices are kept to a minimum, Garry Richards said, which can be a problem when running  a business but it’s something they choose to do.
“One of our biggest problems is that we don’t go up on prices a lot,” Garry Richards said.
The reason for the lower prices is not to take a jab at competitors but to help the customers who may be on a fixed income.
Port Neches Chamber members and board of directors are the ones who nominate the small business person of the year and Billy Joe’s received several nominations, Plaia said.
“They are a small, family owned business and need to be recognized,” she said. “We need to support them and keep them in business. They (small business owners) are crucial to the economy and a lot of life’s lessons can be learned from those two business owners.”
E-mail: mary.meaux@panews.com
Twitter: MaryMeauxPANews