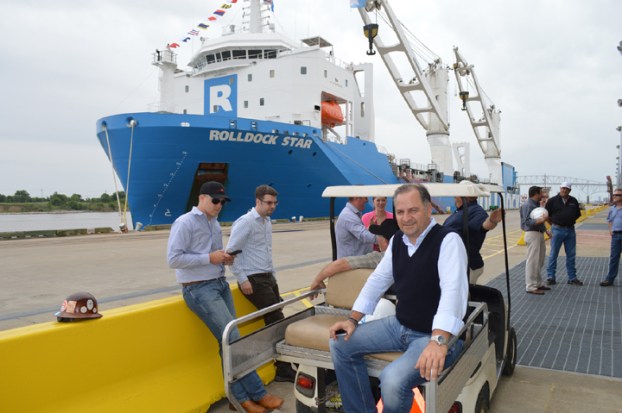 About 100 people gathered Tuesday to celebrate the maiden voyage of a Dutch heavy lift transport vessel that delivered its first United States cargo to the Port of Port Arthur.
The vibrantly-colored blue and white RollDock Star arrived in Port Arthur about a week ago from Spain with a load of coldboxes slated for the Chenier LNG project.
“The port is delighted that the ship called on Port Arthur in its maiden voyage in the USA, and that we can help the Chenier LNG project in the process, John Comeaux, Port of Port Arthur board of directors president, said.
To celebrate the fete, potential customers, port personnel and representatives from owner RollDock, were on hand during a meet and greet that featured tours of the ship, and a few words from Roberto Frigeni, vice president and managing director of RollDock USA Inc.
“It’s been a successful day. Most of those invited attended the event,” Frigeni said. “I was very impressed with how nice the port is and look forward to coming back with the same load four months from now in October.”
On board the vessel the crew was readying for a 6:30 p.m. departure Tuesday, Jeroen Knol, RollDock Star captain, said.
As is usual procedure, Knol flew to Southeast Texas to relieve the last captain. Under his watch, the ship will depart for Pensacola, load there before journeying on to Egypt to off load.
Officers on the ship are Dutch, while the crew is Philippino. The ship’s home port is Rotterdam, The Netherlands.
Since the shallow draft ship was first launched in 2013, its been busy — perhaps because of its unique three-option loading or discharging capabilities.
Loading and unloading of cargo can either be done with heavy-duty cranes capable of lifting 350 t of cargo, by ramp for roll-on, roll-off, or the vessel can be submerged to allow cargo to be floated in or out.
“Normally, a vessel can do one or two of those, but not all three, Knol said.
Toon Le Coultre, an officer with the Netherlands Merchant Navy on board the RollDock Star, said the crew was proud to be manning the new ship.
“It is so large, you can load a submarine onto it,” Coultre said.
Since the vessel was first launched in 2013, two submarines have been loaded by floating them into the cargo area.
“She is beautiful; this is really a special ship,” Dennis Devlin, vice president with Panalpina, a potential customer, said. “I would not go to a maiden voyage for just anybody, but this ship is worth the trip.
Devlin said he also wanted to visit the Port of Port Arthur since he had not before, especially since his grandmother was from Port Arthur.
“This was an excellent opportunity for us to continue the port’s cargo diversification efforts,” Comeaux said. “It shows the port has the capability to handle these oversize project cargo equipment that can be used in local refineries or in the LNG plant build up.”
E-mail: sherry.koonce@panews.com
Twitter: skooncePANews