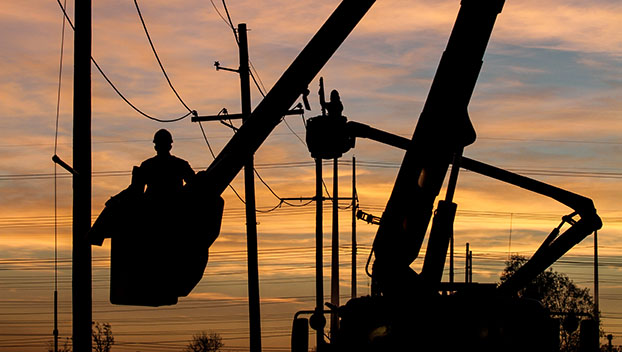 Additional resources are being deployed to the hardest hit areas of the Orange, Port Arthur, Winnie and Beaumont networks to assist with restoration efforts.

Orange County was most heavily impacted by the severe weather with more than 17,300 customers without power as of 8:30 p.m. Tuesday.

Entergy Texas is expected to provide another storm center update at 10 a.m. Wednesday.

As of 8:30 p.m. Tuesday, the following customer outages exist:

Sheriff Jimmy Lane Mooney said the county saw quite a bit of damage with the storm and tornado.

Some of the damage included two 18 wheelers being flipped at Interstate 10, some property damage and street flooding.

Mooney said the sheriff’s office received reports of tornados and he believes a tornado is responsible for flipping the 18 wheelers.

There were also reports of trees and power lines down in the area of Tulane Road off Texas 62.

Mooney said one of the detectives with the department suffered an injury to his forehead when a tree hit his home. Officers were at the scene trying to cut the tree off of the house at 6 p.m., he said.

There are also reports of power outages, anywhere from 5,000 to 15,000 without electricity, he said.

Orange City Manager Mike Kunst said, “That storm came and hit us kind of hard, like it did most folks, and moved on.”

He reported minor damage at Fire Station 2 and noted there were downed limbs. “Compared to some of things we saw earlier today around Baytown, we are OK,” Kunst said.

The city manager stressed there are numerous reports of trees and limbs hitting homes in the region and for those residents, it’s quite clear this was a major event that should not be minimized “by any means.”

Most of the reported damage in Jefferson County came from the rural areas. Sheriff Zena Stephens said there have been reports of fences down and of an 18 wheeler flipped on Texas 73 in the LaBelle Fannett area.

Stephens said there were reports of sightings of a tornado touching down in that area and reports of power lines down.

The Jefferson County courthouse in Beaumont closed early Tuesday due to the threat of inclement weather, which allowed deputies stationed in various areas of the county to respond as needed, Stephens said.

There was a wreck on Interstate 10, where a deputy stopped to assist and the deputy’s vehicle was struck from behind. No injuries were reported.

Stephens wanted to remind residents when fences are blown down in rural areas of the county, livestock sometimes escapes.

Port Arthur City Manager Ron Burton said he had not received any reports of extreme damage as of 6 p.m. Tuesday.

Burton said the city’s pump stations were manned and worked. He praised Jefferson County Drainage District No. 7, saying their crew and the city worked well together.

Burton also noted there were no reports of vehicles flooding on Jimmy Johnson Boulevard.

He said the city would continue assessment for any damages on Wednesday.

“It seems we were well prepared,” Burton said.

At 4:20 p.m. Tuesday, the City of Nederland issued an alert of an active tornado touching down. City Manager Chris Duque said he checked with Central Dispatch and had not heard of any major damage.

Duque said the city’s fire chief sent the alert as soon as he received news of the possible tornado. The reason for the alert was due to the potential loss of life and property.

Some city staff were released early Tuesday voluntarily, he said.

Duque also wanted to ask residents to sign up for the Southeast Texas Alerting Network. The STAN sends alerts regarding major events such as inclement weather, boil water notices and more.