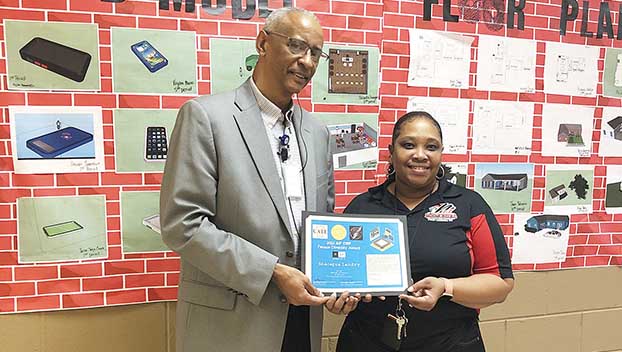 The College Board recognized Shalequa Landry with an AP Computer Science Female Diversity Award for sharing her area of expertise with Port Arthur students. (Courtesy photo)

More than 1,100 institutions achieved either 50 percent or higher female representation in one of the two AP computer science courses or a percentage of the female computer science exam takers meeting or exceeding that of the school’s female population during the 2021-22 school year.

In 2022, Landry and MHS/CATE were one of 832 recognized in the category of AP Computer Science Principles.

“We’re honored that our school earned this distinction and look forward to seeing these young women and others pursue and achieve success in computer science education and careers. What makes this even more special is that Ms. Landry is a proud product of PAISD, having graduated from the historic Abraham Lincoln High School in 1992. This is a full circle moment as an educator who is giving back to her hometown community.”

Trevor Packer, College Board Head of the AP Program, said computer science is the source code of our economy and so much of our daily lives.

“In the five years since we began the AP Computer Science Female Diversity Award, it’s been heartening to see schools like Memorial and the CATE campus welcome so many more young women into this vital field,” Packer said.

The first year of AP Computer Science Principles in 2016-17 attracted more students than any other AP course debut, and participation is on the rise.

Providing female students with access to computer science courses is critical to ensuring gender parity in the industry’s high-paying jobs and to driving innovation, creativity, and representation.

The median annual wage for computer and information technology occupations was $97,430 in May 2021.

However, women represent just 24 percent of the five million people in computing occupations. That’s why College Board research about AP CSP is so encouraging. According to the data, female students who take AP CSP in high school are more than five times as likely to major in computer science in college, compared to female students of similar background and academic preparation who did not take CSP.