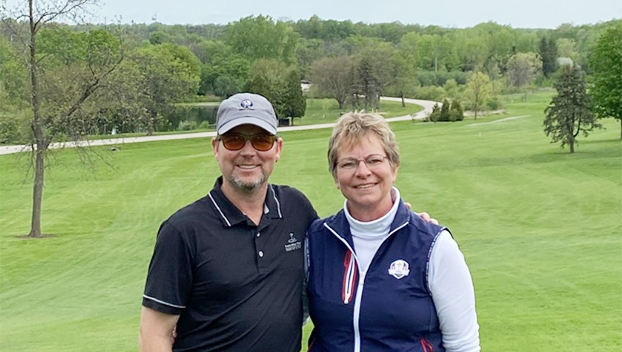 Joe Warring and Becky Blank team up at Mee-Kwon Park in May 2022. (twomantour.com)

Mostly by accident, last fall I stumbled onto something called the Two-Man Tour that quickly proved it can fill a void for golfers across the handicap spectrum who like to compete in something several steps above four-person scrambles.

The latter, in this opinion, while great for charitable causes, basically wiped out fun, competitive local events.

My exposure to the Two-Man Tour came when youngest son Grayson, who lives in the Dallas area, called to recruit me as his partner for one of its tournaments at Westridge Golf Course. His usual partner, former Hamshire-Fannett basketball/golf coach Gerald Parr, had a wedding dropped on him late and was forced to cancel.

Since I never pass on a chance to play with Grayson, usually in Father-Son tourneys, accepting was a no brainer. What a great decision it turned out to be. We won our flight, collected roughly double our entry fee in the cash payout and are currently mapping plans for 2023 Two-Man Tour events, especially a 54-holer at Koasati Pines in Kinder.

Making things even more interesting is a skins game that can provide a lucrative payback if you get that birdie in the right place.

Players are flighted after the first 18 holes – usually there are four flights – by that opening-round score. Yes, my sandbagger detector went off when Grayson told me how it worked. But tour operator Joe Warring was a step ahead on that one. He instituted a rule that any team placing first in its flight by 5 or more shots is automatically moved up a flight.

That is not foolproof but close and removes handicaps completely. Shoot 80-70, or something with a similarly big discrepancy, and your victory celebration gets toned down quickly. The formula works even better, says Warring, when flights are determined after 36 holes in three-day tournaments.

Technically a version of the Two-Man Tour dates back to 2011. But for years it was actually the Two-Man Challenge and only consisted of a single event at one of America’s finest resorts – Horseshoe Bay. Not until 2021, egged on somewhat by those who qualified for the Horseshoe Bay gathering, did Warring ease into the Two-Man Tour.

He tested the interest level with events at Wolfdancer and Koasati Pines two years ago, then added a handful more in 2022. This year there will be four in the Houston area, four in and around DFW, a couple in the Hill Country and a June stop at the Coushatta Casino Resort’s Koasati Pines.

Next year, who knows, we might talk Warring into scheduling a tour stop in our area of Southeast Texas.

The cherry on top for 2023 is that teams finishing first or second in their flight at each event advance to a Texas Two-Man Tour Championship, probably in November, at a site yet to be determined.

“I was overwhelmed at the response,” said Warring, a native Houstonian with a lengthy history in the golf business. “I thought if we had 50 players at each of the first stops the idea would be a winner. But we have averaged much more. We fill up quick. Our max is 110 to 120.

“There just seems to be a real appetite for the two-man concept. I think it attracts so many people who played sports their whole life and now work for a living and have so much fun competing with a buddy or a son or a father. I love it because you appeal to such a wide range of golfers and can be competitive at the same time.”

Meanwhile, the best way to get the full picture of what the Two-Man Tour is all about, including schedule, tour philosophy, logo and how to enter a tournament, is to go to its website – www.twomantour.com.

Texas A&M grad Warring’s background includes volunteering his time as a 15-year old at Houston’s Bear Creek Golf World in exchange for free golf, working golf shop operations at private and public facilities and being involved in the startup and success of an online marketing engine for golf courses called GolfQ.com from 2000-2010.

He believes the Two-Man Tour will ultimately be his golf legacy.

“That is my sense of purpose,” he declares. “It’s sort of what is driving me. I love growing the game and building the 2-man community. I see the excitement and demand for something like this and believe there is tremendous growth potential.

“I can see these guys having their eye on the prize, on winning or placing second and getting to go home and tell the wife they qualified to play in the Texas Two-Man Championships.”

Joe, I can tell you two guys who are salivating at the idea of being able to do exactly that.

Golf news should be e-mailed to Bob West at rdwest@usa.net.