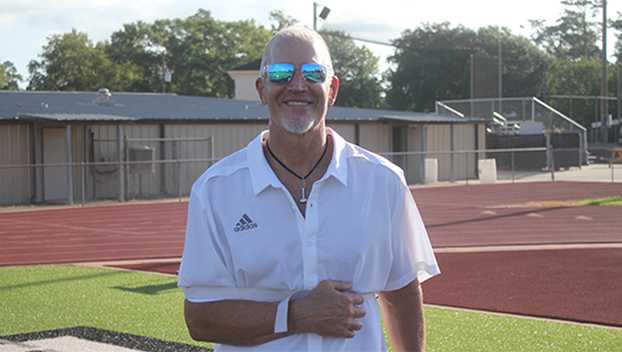 VIDOR — Long-time Vidor football coach Jeff Mathews informed his players in athletics class Friday morning that he would no longer be their football coach.

He worked the student athletes out and then looked on his phone an hour later and had more than 200 text messages as news of his decision spread across Southeast Texas and beyond.

“I’ve cried about eight times,” Mathews joked with Port Arthur Newsmedia Friday morning. “I got to get away. I am tired of people seeing me cry.”

Head Pirates football coach since 1999, Mathews is walking away from coaching to start something new.

“I can’t 100 percent say that I am through coaching,” he added. “I don’t know. I am going to try something new and see how I like it. I still have a passion. I love the relationships with the kids and watching them grow up, seeing how they change over their six years with us. This is a get away, I guess. I don’t know if I can stand retirement.”

In the immediate timeline, Mathews plans on being on the sideline of every game, though he stressed he would not interfere with the new coach.

He just wants to high five, hug or get on players if they are doing less then he thinks they are capable of.

“I will work at Vidor for the rest of the year,” he said. “I’m going to show up and work the kids out everyday until they hire somebody new and then help them get adjusted to it. I’m not going to leave the kids shorthanded. I am going to make sure they are ready to go for when the new guy gets here. They are not going to miss a beat.”

According to Mathews, he never promised a state title or win total, but said every student in the football program would be a better father, husband, son and Christian for their efforts.

He also promised to relentlessly pursue a district championship every year.

“Obviously, we didn’t win as many as we wanted to win, but I feel like the program is in better shape now then what it was,” he said. “Winning and losing has never been the most important thing to me. Seeing a guy I coached in 1999 walk up and introduce his son to me and say, ‘boy, I hope you get to coach him,’ has always been more important.

“My biggest moment is seeing kids that I coached and knowing we had a chance to better their lives. That is far more greater than any win or district championship.”

They lost their first three non-district games as turnovers and penalties hampered their play.

However, Vidor rebounded, winning six of their last seven regular season games, including going 4-1 in District 10-4A Division I play, to nail down the district’s second-place playoff seed.

The season ended in the Class 4A Region III Division I bi-district round of the playoffs, where Vidor fell to the Lindale Eagles 45-23.