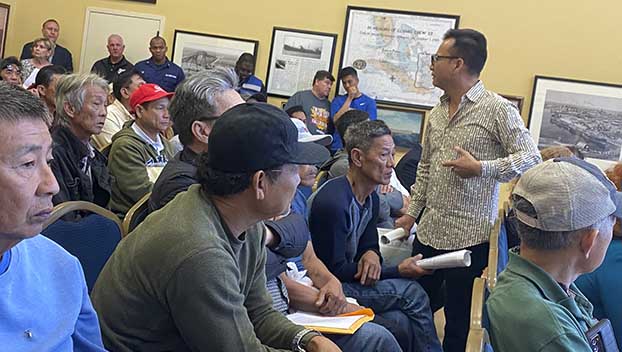 “Gulf shrimpers on are the verge of collapse.”

Viator, joined by Weber’s staff member Blake Hopper, summarized the letter before the crowd that filled the chairs and lined the hallways of the Seafarer’s Center.

And while the multitude of speakers covered a variety of topics, imported shrimp was a focal point.

“People will pay more for domestic shrimp if there’s a demand for shrimp,” said attorney Nathan Rickard, who represents the Southern Shrimp Alliance. “When imported shrimp swamps the market to where we have more imported shrimp in the market then there is demand, domestic prices collapse to try and sell at what imported prices look like. So what we think is going to happen for 2023, is if the prices you have been receiving that are very low are going to continue to be low next year because of the amount of imports that are in place.” 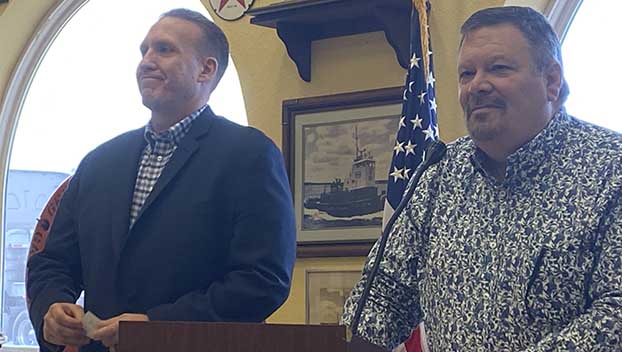 Imported shrimp, he said, has reached nearly 1.8 billion pounds annually, which is worth nearly $8 billion.

Wednesday the attorney asked local shrimpers to complete a form that collects three years of data that will be submitted to the International Trade Commission.

“This form that we are asking people to fill out which asks fishermen about their operation in 2019, 2020 and 2021 is to tell the federal government that the shrimp industry still needs relief on the imports from China, from India, from Thailand (and) from Vietnam,” Rickard said. “There are lots of other shrimp imports that are coming into the United States right now. Ecuador, in particular, is exporting lots of shrimp to the U.S.”

According to the letter written by the eight members of Congress, half-yearly shrimp imports have increased 37.5 percent to about 713 million pounds. The value has increased almost 54 percent in two years.

“Additionally, much of the shrimp being imported does not meet our domestic health standards,” the letter states. “When performing field inspections, the Food and Drug Administration routinely find that more than 10 percent of imported shrimp contain banned antibiotics used in aquaculture practices. Left unchecked, these contaminated shrimp are entering our markets and posing a health risk to Americans — all while our safe, domestic producers are flooded out.”

“I pray that we will have below $3 a gallon diesel price,” said Rev. Sinclair Oubre, treasurer, Port Arthur Area Shrimpers Association.

Rickard said in the most-recent review of information, records for 244 shrimp farms and boats representing 24 million pounds of shrimp in 2021 were submitted. Of those, 126 were from Texas, 35 from Florida, 23 from Alabama and 20 from Louisiana.