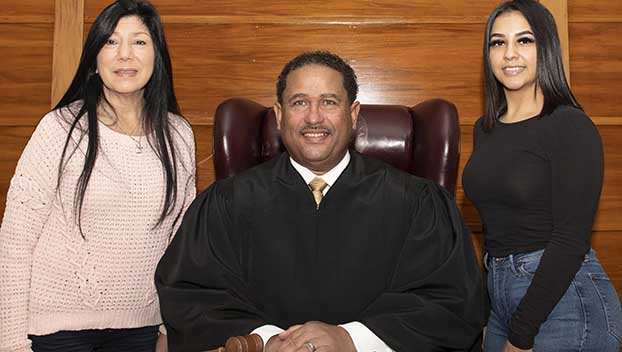 While there has been a significant change in the office of Precinct 2 Justice of the Peace, staff members remain dedicated to the mission.

“It’s been a pretty smooth process,” Associate Court Administrator Tina Moreau said of the last two weeks. “It’s always been an honorable court. We’re here to serve the public, and we do a great job of it.”

On Jan. 3, Judge Joseph Guillory took the Oath of Office and the bench.  He was declared the winner of the race in March after defeating incumbent Marc DeRouen with no Republican opposition. Within months, an Independent and Write-In candidate joined the race for the November election.

It’s the first time in 12 years the court has had a new judge.

“Anytime you have a new judge coming in, it’s a learning process,” Moreau said. “You have to buckle down and make sure everything is running smoothly.”

And that includes changing out stationary and envelopes while still handling petitions, evictions, debt claims, small claims, traffic issues and criminal trials, among other duties.

“We get it done,” said Cassandra Corona. “We’re hard workers.”

And their dedication, Guillory said, has been instrumental in his new role.

“The staff has been so gracious to me,” he said. “They have really done a tremendous amount of the work to make sure that I’m prepared and making sure that I’m aware of what is going on. They’ve done a great job of explaining a lot of the process and procedures that they’ve done here.”

In two weeks, the three have implemented some changes help improve their operations.

“I couldn’t ask for a better team,” he said. “They have really stepped up and answered the call. We’ve bonded and have nothing but laughter. They show up everyday, and they try to beat me to work. We have a little contest on who shows up first. We produce a lot of work out here.”

Moreau, who has been in the court for nearly 15 years, is serving with her third judge.

“We try to make it as fun as we can, but business is business,” she said. “There are lots of duties to this office.”

On Tuesday, Guillory will officiate his first jury trial.

“I’ve been incredibly excited — going through the process and the motion of everything, taking what I’ve learned in school and applied it,” he said. “It’s a lot, but I am excited. We have helped everyone that has come to this court. Whatever the situation was, whatever decision was made; it was in the best interest of justice and the best interest of our citizens.

“I feel very good about the work that we’re doing, and I’m excited about the opportunity to be able to serve this community. Accountability is everything.”

The path to the gavel

Guillory has a plaque on his wall that says, ‘Living the dream.’ And it’s more than inspiration.

When he announced his intentions to run for justice of the peace, Guillory was a trustee for the Port Arthur Independent School District. But he always had intentions to go further.

“I remember a conversation I was having with my mother back in 2010,” he said. “I laid out my dream and what I’d like to see happen, to be a part of the change in Port Arthur. And here we are in 2023 — part of that vision. The vision that I had then we’ve seen come to fruition.”

And it’s one, he said, that couldn’t have been possible without his wife, Sueanda Guillory, and their two children.

“The pressure that they’ve been under through all of this, the things they had to listen to in the community; they remained supportive and excited,” he said. “And everyday has just been a blessing.”

Support has also come from their church, other elected officials, and community members.

“In this election, the people made a decision on what they wanted their future to look like,” he said. “And that’s what I’m excited about — the people. The people stood up; the people spoke. So the help that my family has given me and the support has been tremendous.”

As he looks to the future, Guillory plans to rule with law and logic.

“We have to be compassionate in everything we do,” he said. “It’s hard because you’re very sympathetic to the needs of the community, but at the same time you have to hold them accountable. But you can help them, encourage them and give them hope. That’s what we want to do here — we want to give people hope for the future.”