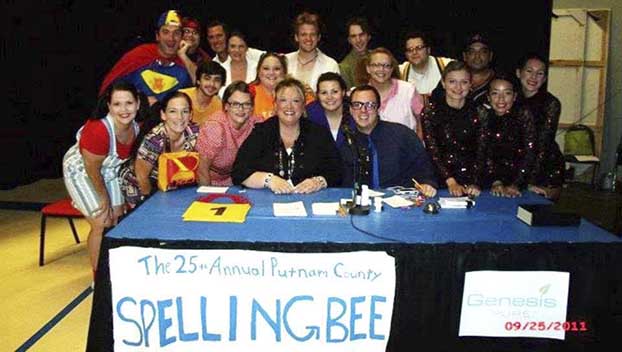 While I have always been a dramatic person, I am not a theatrical one.

I grew up with a deep love for music, singing, dancing, musicals and plays but never once thought about acting — until I somehow ended up in the front and center of one for weeks.

It started in 2011 when Lamar State College Port Arthur and Port Arthur Little Theatre joined together to produce “The Wizard of Oz.” I had seen the casting call for children to fill munchkin roles and thought my theatrical child would enjoy it. She didn’t have many hobbies at the time and it seemed like something that would be perfect for her. However, she would only agree to audition if I did, too.

At the very least, I thought I would embarrass myself slightly in front of people I didn’t know and would never see again. That was very, very wrong.

Not about embarrassing myself; that part very much happened. But while standing there watching a teenager with glittery slippers, braided pigtails and the spirit of Judy Garland sing “Somewhere Over the Rainbow,” a friend said he would soon be directing a show at Port Arthur Little Theatre and asked if I’d audition.

Anyone who knows me knows I have a very difficult time saying “no,” so I agreed. Again, at the very least, I would embarrass myself slightly in front of people I didn’t know and would never see again. Or, better yet, he’d forget I agreed and I’d be off the hook.

And again, I was very, very wrong.

I practically pass out anytime I have to speak in front of three or more people, and here I was among a group of very talented and very seasoned actors who had no hesitancy singing and dancing in front of everyone. I pushed through the singing, some dancing, a few lines and then headed home to put my flushed face in a shower and wash the humiliation away. And then I got the call.

Not only had I been cast in “The 25th Annual Putnam County Spelling Bee,” I would be playing one of the main roles. There was a solo with a lot of dancing that I would need to choreograph myself on top of the dozen other songs and professionally choreographed numbers we learned in small and large groups.

Rehearsals were two hours a day, four days a week for six weeks before we performed four times a weekend for three consecutive weekends. Many of us arrived straight from work with children at home so we could dedicate ourselves to creating the best show possible. We had CDs of the instrumental tracks that played in our vehicles, homes and anywhere else we could fit in practice. It was hard. It was stressful. And it was one of the best experiences of my life.

There were times during performances that I had to bite my lip to keep from laughing. Every show was different, and there was no predicting what would happen. That phenomenal group of volunteers treated every show as if it were on Broadway.

Last year I was able to watch Beaumont Community Players produce the same musical. It was a welcome flashback and a completely new experience to see what a different director, different actors and different choreographers did to create a show of their own.

Several of those people were friends I had made during my one and only attempt at theater. But the friends I made in 2011 are still friends to this day. We share a wonderful bond I can’t explain outside the group. No one else is going to start laughing at the mere mention of a capybara.

If you ever find yourself thinking there isn’t enough entertainment in the area, you haven’t experienced a Port Arthur Little Theatre show. The 2022-23 season continues this month with “Matilda,” followed by “The Outsiders” in March and “Bus Stop” in May.

I can assure you, it’s worth every dollar.

And if you’re really looking to fill some time, audition. Days and times are posted on the PALT Facebook page.