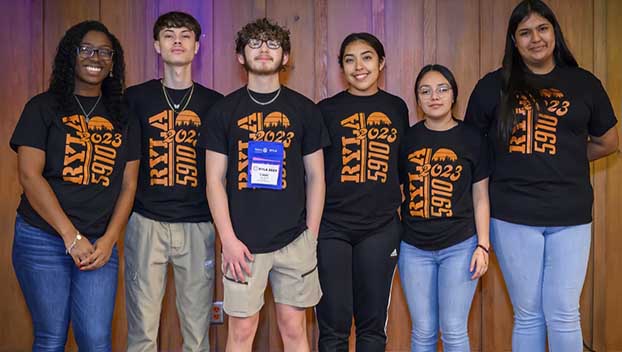 The Bob Hope High School Interact Club students and their sponsor were all smiles Thursday after returning from Rotary Youth Leadership Awards this past weekend in Woodlake, Texas.

The annual event is held in each district for Interact students in order to build communication skills, work on problem solving, learn from others and create new friendships.

“We have a very large group,” said Campus Director Jesus Acosta. “We have over 40 members at the high school. Of those 40 members, we had about 16 that were sponsored to attend RYLA.”

The Rotary Club of Port Arthur sponsors the cost for attendees.

“It’s always good to see each group of students that filter through,” said Bob Hope Interact Sponsor Jordin Chaney. “They just keep getting better and better. Last year I was able to be a part of the planning committee for RYLA, and I was able to help vote in the next group of counselors. And it’s just so amazing to see their transformation from high school being in Interact to becoming Rotaracters and becoming counselors.”

Rotaract focuses on people between 18-30 and can often be found at universities.

“I’m hoping these ladies and the other two gentlemen that were with us this time could possibly become counselors,” Chaney said. “It’s just really cool to see how they interact with each other and teach the other Interact members skills to be more qualified to be a leader and helping each other.” 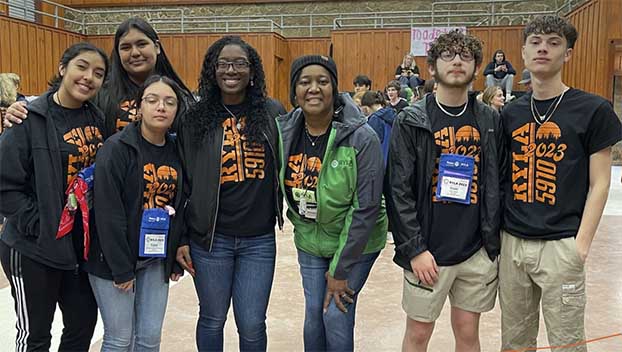 Chaney said on the first night, the group was greeted by District 5910 Governor Demetress Harrell.

“The first night (Harrell) gave us a speech and I pulled her aside and told her, ‘I didn’t know you could preach like that,’” Chaney said. “She taught the students about being a game changer. And things can come to you but it’s better to go and get things as far as progressing in life and going against challenges. It was very inspirational…and I enjoyed myself.”

The students were also split into groups.

“None of us knew each other as a group,” said Karen Guerra, a junior at Bob Hope. “It was all just a combination of different people.”

That, she said, made everyone a bit nervous when it was time for the trust fall.

“After the trust fall, you really got to trust people in a different way,” Guerra said. “I was one of the last ones to go. I went, and Ms. Cheney told me, ‘You can do it.’ We did it, and after this our bond became closer.”

Chaney said the fall was done from a platform in a tree five feet in the air. She attended to ensure the children were safe, but instead was talked into participating by one of her students.

“When I tell you I went up there three times and I was like, bro, I can’t,” she said while smiling. “I’ve got bills. I can’t break my back.”

But she took the literal leap.

“By the time Karen’s group came around, I was like, ‘Look, Karen, you can do this. Everyone from Bob Hope’s group has to jump or you have to walk back home,’” she said as the students laughed.

Counselors were previous students that had attended camp as Interact members. Junior Cassandra Sandoval, described by Chaney as occasionally shy, was paired with an outgoing counselor.

“She definitely got me out of my comfort zone,” Sandoval said.

On the final day, the groups each built cars from cardboard boxes and raced. Guerra’s group took third place.

“My car was the best car,” senior Marimar Guillen said. “We weren’t first place but in my heart we were first place. If we wouldn’t have hit the soccer posts, we would have won.”