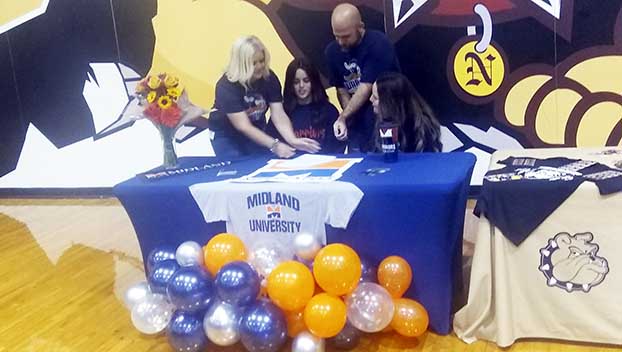 NEDERLAND — Powerlifter Taryn Brunet is living out a dream.

On Wednesday the Nederland High School senior signed a letter of intent for powerlifting to Midland University in Nebraska.

“We found each other,” she said of the school.  “They’re the national champions in powerlifting.”

Brunet received a half scholarship to the private Division II school. She plans to major in psychology and speech pathology with hopes to eventually obtain a master’s degree in speech pathology.

“They’re the best in the nation at powerlifting,” she said. “Maybe best in the world. Ever since my sophomore year I’ve wanted to compete for them.”

Brunet said her specialty is the deadlift and the bench press. She has won numerous medals.

“We have a meet in Vidor coming up, and I want to get another gold medal,” she said.

Her signing was well attended this week because she joked she invited everyone she knew.

“It’s a great opportunity,” he said. “She’s a hard worker. She has represented our program very well.”