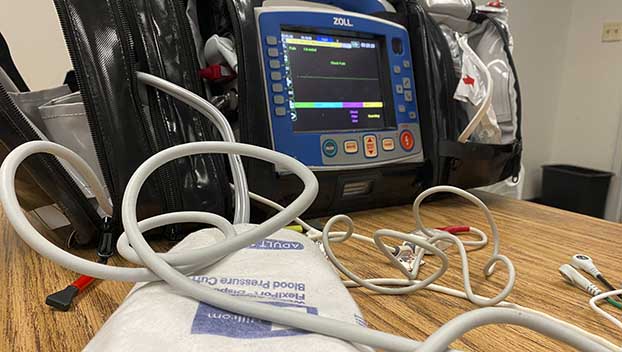 Professional use AEDs used by first responders, such as this one at Port Arthur Fire Department Station No. 1, are more advanced than public access machines found in city buildings, schools, malls and other public places. (Monique Batson/The News)

Buffalo Bills safety Damar Hamlin had no pulse when he fell on the field during Monday Night Football this week.

But, according to a tweet from a teammate, assistant athletic trainer Denny Kellington administered life-saving CPR to restart the 24-year-old’s heart.

And it’s something local officials are hoping to prepare others for.

“It’s a reminder that you just don’t know when some of these things are going to happen,” said Port Arthur Fire Chief Greg Benson. “The need for rapid response was really reinforced the other night. With the football player, to be able to take those actions, that’s how you save a life.”

Benson intends to soon approach Port Arthur City Manager Ron Burton and councilmembers regarding community training in CPR and Stop the Bleed, a national initiative used to teach bystanders how to slow a bleeding emergency until first responders arrive.

The department employs CPR instructors that would lead courses.

“There have been instances in the past where one individual was eating lunch and all of a sudden went into cardiac arrest, and there was another person in the restaurant that knew CPR,” Benson said. “It made a difference.”

According to information from the U.S. Food and Drug Administration, automated external defibrillators combined with CPR are effective in saving lives following collapse from sudden cardiac arrest. The portable devices are used to deliver an electric shock to the heart if necessary.

Public access AEDs can be found in multiple places, such as City Hall and school campuses. Professional use AEDs, used by first responders, are more advanced.

Benson said PAFD carries one to every medical call. In addition, last summer the department received two AutoPulse machines — a vest that wraps around a patient for automated CPR. The life-saving device performs consistent chest compressions, eliminating the exhaustion or damaged bones that can result from manual compressions done by first responders.

The two machines are the only automatic CPR devices in Port Arthur and Mid County.

“There has been an increase of 10-15 percent return of spontaneous circulation when using the AutoPulse,” Benson said. “You cannot guarantee the outcome of every emergency incident, but if you’re not trained and don’t have the right equipment, the number of positive outcomes is reduced.”

They will be used to replace existing equipment.

“When a person collapses in (sudden cardiac arrest), minutes count,” Vega wrote in a memorandum. “A person in SCA is not breathing, and their heart has stopped beating. Immediate CPR can keep a person’s brain and heart alive until definitive care arrives. In addition to performing CPR quickly, using an AED can give this person the best possible chance to survive.”

Vega said without early use of CPR and an AED, an estimated 2.5 percent of SCA victims survive. Early initiation of the two devices raises that number to nearly 80 percent.

Benson said there are occasionally challenges with the mechanical makeup of a person’s heart.

“There could be something else going on that can’t be corrected,” he said. “You can do CPR incredibly efficiently and do everything right, and it won’t make a difference.”

But that was not the case, he said, for Hamlin.

Friday morning the Bills announced that he was no longer ventilated, he was breathing on his own and his neurologic function remains intact.