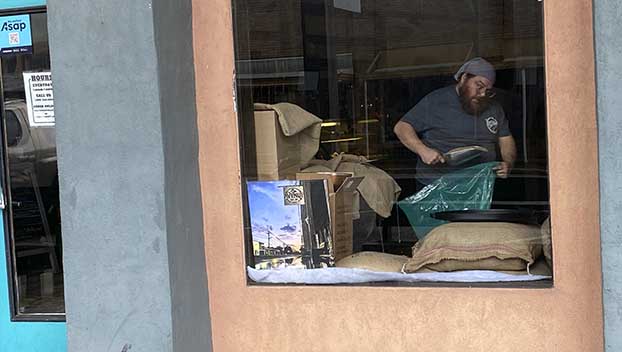 Chad Perron can be seen working inside The Avenue Coffee and Café. (Monique Batson/The News)

From the menu selections to the staff, The Avenue Coffee and Café is brimming with opportunity.

It’s a place where turkey and peach meet on a Panini, pecan pie is a cheesecake, muffins are made with bacon and cheese, and local people have the opportunity to follow dreams or find them.

“It’s a great space for anyone to come in and learn a skill that you can take anywhere,” said co-owner Randy Edwards. “You can leave Southeast Texas and become a barista in any big city that you want.”

When the shop on Port Neches Avenue opened four years ago, Meagan Hockett became the first hire. The graduate of Port Neches-Groves High School had a passion for baking with creativity, which fit the café’s mission from the start.

“I’m big on creativity, like flavor combinations and getting stuff that you normally can’t,” she said. “If the item is not doing good for a while, I’ll replace it. And it seems as soon as I replace it, people are like, ‘Where is this item? When are you going to have this item back?’ So it’s what the customers like. We’re big on, no matter who walks through the door, finding something everyone will like.”

Edwards said she leads the innovation side when it comes to baked goods and sandwiches.

“Meagan Hockett has been creating wonderful items from the get-go,” he said.

But the self-taught chef is as much personality as creativity.

“The pecan pie cheesecake has always been my favorite pie,” she said. “That’s always been the top selling pie every year; it’s never going to go away from our holiday pies. I do like making the new pies because I really am a pie person. Pie is superior to cake, in my opinion.

“I always want to make new pies, try new pies. I really enjoy the cranberry custard pie, as well. That’s probably my second favorite pie, because you get the sweet and tart and it has this creamy custard on it.”

As Hockett and others work on pies, pastries and other tasty treats, Chad Perron brews coffee. Before hiring on about a year ago, the Thomas Jefferson High School graduate had no real knowledge of the beverage.

Now the self-described “nerd” is researching coffee every chance he gets, sharing his knowledge.

“Most people think dark roast is stronger,” he said. “It tastes stronger, but it’s actually less caffeine. The light roast is your strongest caffeine-wise, because the longer you roast it, the more caffeine comes out.”

Now Perron is preparing to help the café move its in-house coffee blends to stores. But those craving a cup of coffee don’t have to leave home for it, as they offer a subscription service.

In 2019, The Avenue Coffee and Café became the subject of a widely- hared video captured from security cameras inside. Shortly after capturing the bright light from the nearby explosion at TPC Group, the windows and doors of the café are blown in.

When reminded of that, Edwards laughed.

“I forgot about that,” he said. “We bounced back and were open the next day. There were closures because of the continuing factor.”

And only a few months later, the owners who were new to the coffee and café business were navigating through a pandemic.

“Within the four years we’ve learned to adjust to anything that’s thrown our way,” Hockett said. “We’ve had COVID. We’ve had the refinery explosion. We’ve had floods; we’ve had freezes. We’ve had power outages that were unexpected. That does not stop us.”