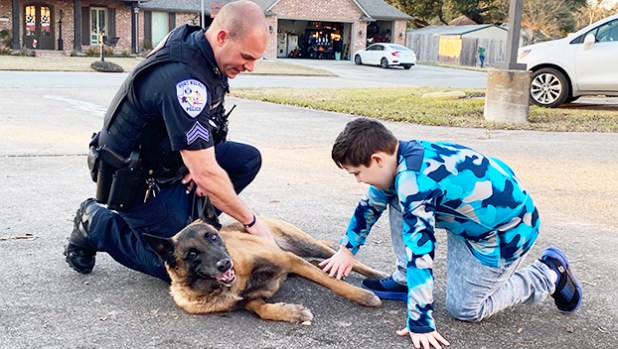 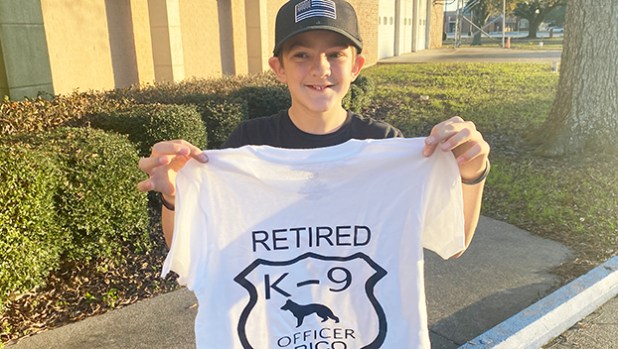 William Albrecht, 12, holds up the K-9 T-shirt he had his mother make for K-9 Rico upon his retirement. (Monique Batson/The News) 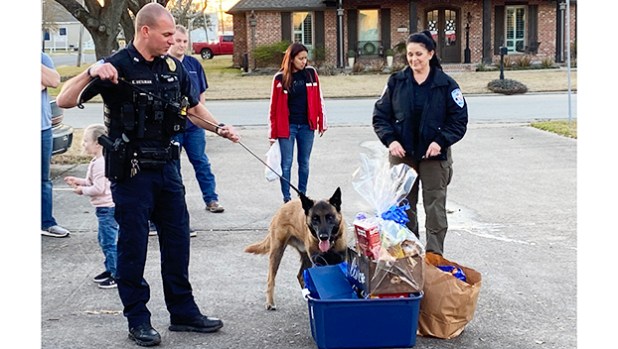 Sgt. Eric Heilman and Police Chief Cheri Griffith talk while K-9 Rico inspects a box of treats given to him by the department and community members. (Monique Batson/The News) 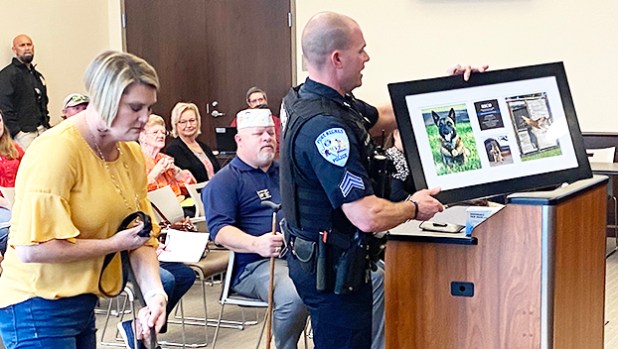 PORT NECHES — Austin Gilchriest was no stranger to Rico.

The 8-year-old walked up to the K-9 Thursday at the Port Neches Police Department and petted him before presenting him with a gift-wrapped box.

“Oh my goodness, that’s a lot,” Sgt. Eric Heilman said while laughing as he unwrapped the large box of Milk Bones.

“Well, he has done a lot,” Lisa Gilchriest said. “You only retire once.”

The Gilchriest family was part of many community members, city leaders and police officers who gathered to wish Rico a farewell on his retirement.

The Belgium Malinois served the city for eight years and will enjoy his final day on duty Friday.

During Thursday’s regular city council meeting, members unanimously agreed to release the dog to Heilman, who has been his partner for seven of his service years.

“It’s very bittersweet for me,” Heilman told council members while holding Rico’s leash. “This is my buddy…he’s not going to be in my car anymore. This guy has done some amazing things throughout his career.”

Commissioned in January 2015, Rico has since been deployed 114 times, apprehended 37 suspects, bitten three, seized 7,947 grams of methamphetamine, seized 36.5 grams of cocaine, seized 20 grams of heroin and found $459,719 while working with multiple departments.

“My whole goal when I took Rico was, when it was time to retire him, whether or not to give question of getting another dog for the department,” Heilman said. “When I talked with (previous Chief Paul) Lemoine, no question at all. When I talked to Chief (Cheri) Griffith, no question at all. So I accomplished my goal. Now we’re moving on. He gets to enjoy life; I’m getting another dog.”

On Sunday he will leave to spend four weeks training with the department’s new K-9 — a Belgium Malinois under 2 years old. That dog will also work and live with Heilman and his family.

His wife and two daughters were at the council meeting and retirement party Thursday to witness as Rico was showered with gifts and affection.

Showna Heilman said she intends on taking Rico to hospitals and nursing homes to visit with residents following his retirement.

“I want to keep him from being like, ‘Dad is leaving, and I’m not ever going anywhere anymore,’” she said. “He doesn’t meet a stranger. With everybody he’s like, ‘Let’s play; let’s be friends.’ My aunt was in the hospital a few years ago and it made a huge difference when we brought him in.”

There is no question the K-9 made a difference to 12-year-old William Albrecht, who was waiting for his “favorite K-9” to arrive at the police station following the council meeting. Albrecht was wearing a K-9 support shirt, and had a photo of Rico as the wallpaper for his phone.

“Rico was a K-9 dog and he came to a First Responder (event),” he said while wearing one bracelet that said Officer Albrecht and another that said K-9. “We got to talk about him. And I’ve been knowing him since Tiger Scouts.”

But Albrecht has made it his mission to get to know the officers, too, as he proved while flipping through the police department’s Facebook page and naming everyone he sees.