Vacant hospital is one step closer to new ownership in Groves 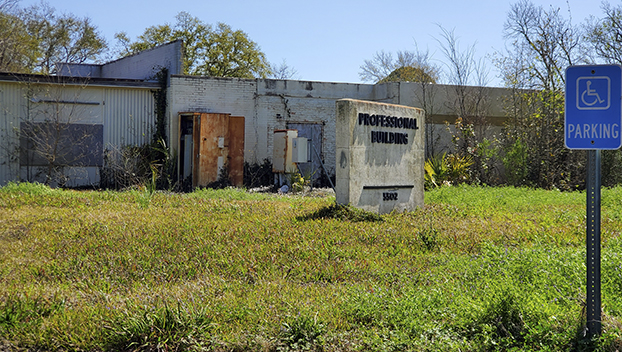 The long vacant professional building in the 5500 block of 39th Street could have a new owner. (Mary Meaux/The News)

GROVES — What’s been described as one of the last remaining nuisance buildings in the city is expected to have a new future soon.

“He’s a local businessman and he’s been working on getting that property for about two years,” City Manager D.E. Sosa said Wednesday of the site that once was Renaissance Hospital.

“I just talked to him on the phone today and the paperwork has been signed. He sent it back to the home company. So he feels very comfortable that he should have possession of the property probably around the beginning of the year.”

Sosa said the man intends to demolish the building at 500 39th St. and develop a form of an assisted living facility.

“It’s not a full-fledged assisted living center,” Sosa said. “But it’s a place where your mom can go if she still drives, she doesn’t want to take care of a big house, she’s a widow, her kids want to come see her every once in a while, and someone comes to remind her to take her medicine. But she’s still mobile, she still shops, she’s got a car and she needs a place to park it.”

The property, which was opened as Doctors Hospital, closed in April 2013 following a change in ownership that led to employee complaints and an investigation by the Texas Department of State Health Services. It was bought and sold several times before being acquired by The Medical Center of Southeast Texas in 2017. Maintenance of the property belongs to the hospital’s parent company, Steward Health.

However, in the near-decade that it has sat vacant, the building has been the site of multiple crimes.

“There has been a lot of copper theft and theft of precious medals,” Sosa said. “It’s almost 15 acres, and the building is huge. It’s hard to keep people from there. So what we did is we lit that place up so the people that live nearby feel a little more comfortable. Light is a good deterrent for a lot of bad stuff.”

Councilman Mark McAdams, who oversees the ward in which the property sits, previously told Port Arthur Newsmedia he would like to see someone purchase the property and create new development, adding what was proposed would be a good place for residents in need of assisted living.

Sosa said it’s a niche that needs to be filled.

“It’s basically for people that want to downsize, don’t want that huge responsibility of a big house, and I think he’s at the right place at the right time,” Sosa said. “I think that people my age will soon be looking for stuff like that.”

– Mary Meaux contributed to this report.