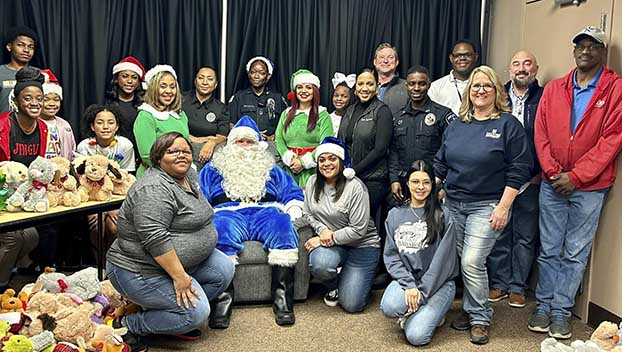 Members of Port Arthur Police Blue Santa and volunteers stop for a photo during the giveaway. (Courtesy photo)

Whether due to the economy, inflation, the pandemic or just families needing a bit of extra help; the Port Arthur Police Department’s Blue Santa program was there to help.

The 501(c)3 saw an increase this year in the number of families seeking assistance at Christmas.

And the big guy in the blue suit came through.

Sergeant Jonathan Green, vice president of the Blue Santa organization, said normally they have 100-150 applicants, which is roughly 300 kids.

“This year we got extra funding so we were able to do about 230 applicationsm which is equal to about 450 kids,” Green said.

A portion of the extra funding came through a Port Arthur News Season of Giving grant powered by Port Arthur LNG.

A number of other entities also pitched in to help. 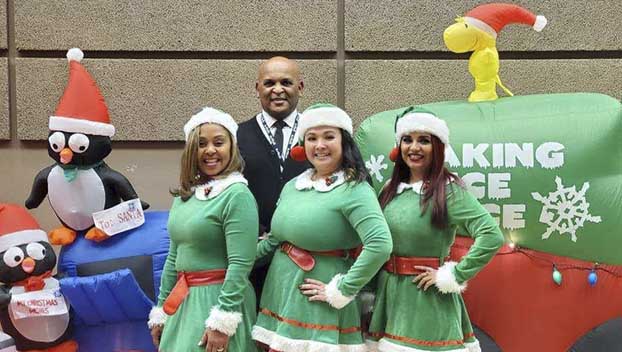 The big Blue Santa event was held Dec. 15 at the Robert A. “Bob” Bowers Civic Center.

Children had the opportunity to receive their gifts and take a picture with Santa Claus. Port Arthur Community Federal Credit Union was on hand to provide cookies and juice packets for the kids.

Green said they probably purchased about $35,000 in toys and another $10,000 in gift cards that were handed out.

But Blue Santa didn’t stop after the Dec. 15 event.

“We still have people that reach out to us at the last minute for help, and that’s where they use the gift cards,” he said. “Sometimes we go to a hospital or nursing home and pass the cards out.”

Lance Bradley, treasurer for Port Arthur Police Blue Santa, said in his grant application for Season of Giving, that Blue Santa attempts to buy two age and gender appropriate gifts for each child.

“The impact is knowing that several hundred children will enjoy at least two Christmas gifts when they otherwise may not have been able to do so,” Green said in the grant application. “In addition, the excitement on the kids’ faces when they attend a gift giveaway and see our Blue Santa, and receive their gifts is priceless.”

Green offered thanks on behalf of Blue Santa to all who contributed to the program and to all the people who volunteer each year.