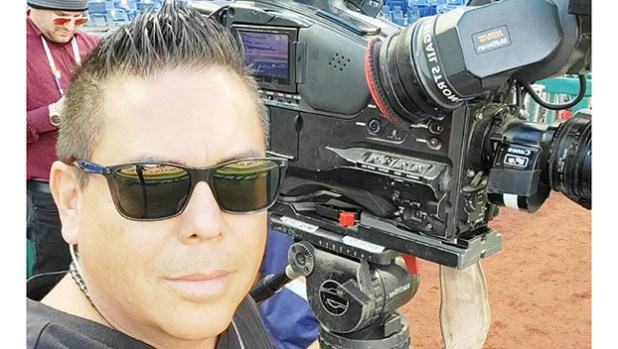 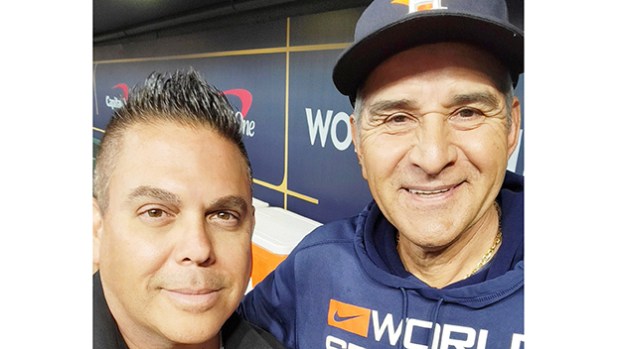 Mike Orta and Houston Astros bullpen coach Dan Firova pose for a picture during the 2022 World Series. Firova is from the same part of Texas and Orta’s mother and is close friends with Orta’s cousin. (Courtesy photo) 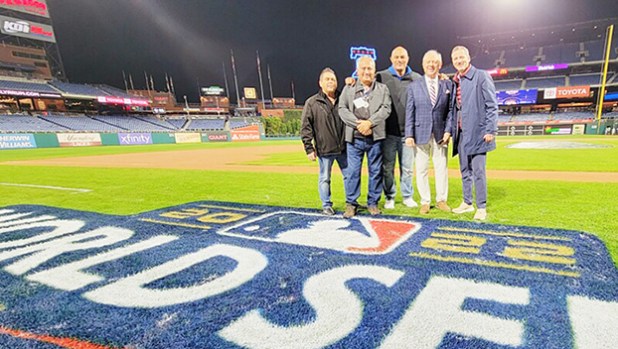 Mike Orta, left, is joined by the KHOU sports crew in Philadelphia during their coverage of the 2022 World Series. (Courtesy photo) 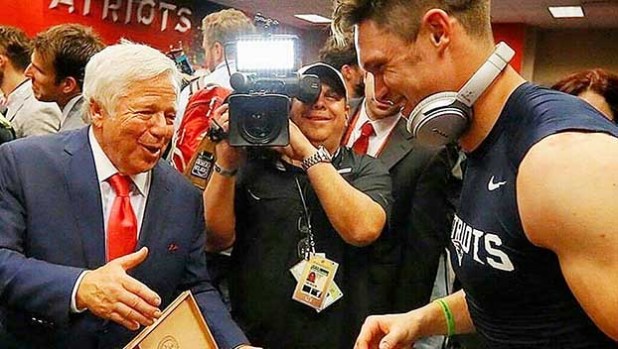 NEDERLAND — Mike Orta was born and raised in Port Arthur and attended Thomas Jefferson High School, where numerous friends of his played football. Yet, he said, he was too small to excel.

So instead the ninth grader noticed a video camera in the electronics department of Sears and Roebuck, where his mother worked.

He picked it up and started filming, which has led to a 30-year odyssey that includes five Super Bowl assignments, numerous professional all-star games and an important role in a Tom Brady jersey theft investigation.

As a 16-year-old, Orta began shooting sandlot football and various high school games from the sidelines.

He attended college straight out of high school in 1989. In his free time, he would run deliveries for his dad, who owned his own company.

“I would work with his company, deliver and carry my camera around,” Orta said. “I also had a police scanner. Anytime something crazy happened — a wreck or house fire — I would film it and sell the footage to channel 12, because back then they had a program called neighborhood network. That is where it started with broadcast.”

Although studying on a path to become an x-ray technician, Orta knew his heart wasn’t in it and set about telling his mother he was going to drop out and focus solely on pursuing a job in broadcast television.

She was supportive, he remembers, but gave him one year to make it happen or return to college.

“Success didn’t come quickly,” he said. “I applied several times with no education, knowledge or broadcast experience, and it was tough to land a job. I have a saying: persistence always beats resistance.”

His first sporting assignment was to cover Jeff Fisher, the new coach for the Houston Oilers at the Astrodome.

“Myself and another reporter went there,” Orta said. “I had no clue what I was doing. I was good at copycatting and seeing what was good on television and doing that.”

He ended up going behind the bench and getting shots “in Coach Fisher’s face.”

Back at the TV station a colleague called him into the edit bay and said, “I can’t believe this footage I’m looking at. You’re not supposed to be behind the bench. Did anyone tell you anything? Then, you are close to Jeff Fisher. I can’t believe no one stopped you.”

He would see the credentials and access the station had but no one was using.

He was told he could go to games, like the Dallas Cowboys, but the company would not pay for his travel.

“I wanted to go on my own just to do it and get the experience,” he said. “My dream was to get in this TV business, now my dream is to go into a Top 10 TV market straight from Beaumont. My scheme was, my friends could go and they would have to drive and pay for the hotel room, while I got them the field access, the locker room access and gave them that whole experience. Out of the 10 guys I was friends with, all 10 were game. That is how I was able to go, because they would pay for the room, the meal, the travel.”

He got better with each experience and the segments were used at the TV station.

After three years in Beaumont, Orta and a couple of colleagues joined Fox Sports Southwest in Dallas.

“My job back then was to shoot a TV show called Big 12 Showcase,” he said. “We would get on a plane every Monday and fly with a host and a producer. We would shoot every Big 12 campus. I would shoot all the ins and outs on Monday. Shoot all the package features on Tuesday. Fly back Wednesday. Edit and post Thursday and air Friday.”

Since then he has shot five super bowls, several baseball and basketball all-star games and been a part of more than 20 Emmy-award winning pieces.

“It’s been a dream; actually a paid hobby,” he said. “I can’t really say this is work. I don’t even have a favorite team. You have to be professional. In the early days, yes, you are very wide-eyed. You are excited. I got to be close to guys like Emmitt Smith, Troy Aikman and Deion Sanders in the early 90s.”

“Myself and my reporter were the first TV journalists in the locker room because we were first in line,” Orta said. “Little did I know I would capture video of the guy that was caught stealing the jersey. He walked right in front of my camera and I had no idea.

“Texas Rangers and (Houston Police) called our station and asked us for our footage from the locker room so they could quickly identify the guy that stole it.”

Orta has developed friendships, professional relationships and connections with numerous sports professionals. He used those to connect Damon West with major coaches across college football.

West, a former college football quarterback, has reinvented himself as an author and speaker following his time in jail and redemption and reconciliation work since leaving the prison system.

“I would not be where I am today without Mike Orta,” West said. “He’s a pro and an artist. His ability to tell a story — to tell my story — has repeatedly earned respect from others in my industry.

“I consider Mike Orta to be just as influential in my new life as (Clemson) Coach Dabo Swinney. In fact, I would not even know Dabo were it not for Mike.”

Today, Orta, who lives in Nederland, works for KHOU, where he has for the past half-dozen years.

“I like to keep the rookie mindset, because when you are a rookie, you are always excited,” he said. “I used to sit back and watch a lot of the old guys be so disgruntled and so salty. I mean, this is a privilege to get up and do what we love. If you think about it, how many people go to games, sit in the stands and wish they could be that close? Everybody fights for the front row, but here I am on the sidelines and in the locker room getting to experience history at the same time. That is what always excites me.”