Pleasure Island playground to be rebuilt with a new look 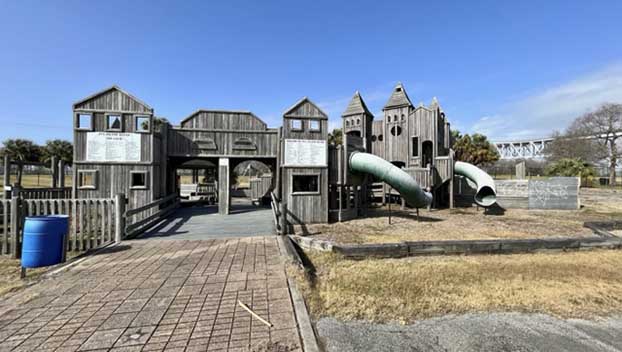 Fun Island Depot on Pleasure Island will be torn down and a new, more modern playground constructed in its place. (Courtesy photo)

Scores of children, and likely more than a few adults, have played at Fun Island Depot on Pleasure Island through the years.

Built in 1999 as a replica of the old Kansas City Southern train depot that was once located downtown, the wooden structure is closed to the public due to safety issues.

But officials say the once popular playground is getting a new life and new look.

The replacement will be constructed by Kraftsman Commercial Playgrounds and Water Parks of Spring, Texas with a projected cost at $749,957.75.

Pleasure Island Director George Davis got in touch with Kraftsman, which was the company who handled the original playground, and said they put a vision together that includes being in line with the colors that will be used in the city’s rebranding project as well as keeping with a nautical theme.

The playground will be a similar size but be more modern and include activities that are inclusive, such as a swing that can be used by a person in a wheelchair as well as a baby swing. And there will be a covered area so people can watch their children at play.

Kids will be able to climb on the structure, wing, slide and peep through window-like areas.

On May 10 an assessment was done by Kraftsman and Davis learned structures such as these have a basic life expectancy of 20 years with proper maintenance.

“He concluded that the majority of the playground is in medium to poor condition, needs maintenance and safety compliance work and most of the equipment needs replacement or repairs,” Davis said in a report to City Manager Ron Burton and city council. “Based on the playground’s overall age and the materials and equipment condition, (Kraftsman) recommends a complete replacement.”

To save funds, city crews will remove the structure, Davis said.

“We have been removing a lot of the areas that are safety hazards,” he said. “If there is something broken or a swing set is not like it should be, we get the guys to remove it.”

There is also a plan to renovate the restrooms near the park. Some funding for this project will come from a Jefferson County tourism grant with a bulk stemming from bond money.

The plan is to make nice restrooms that are near the playground.

Port Arthur City Manager Ron Burton said the park will be an added attraction to the city and called it a major investment.

“It is part of our plan to improve the quality of life amenities in the city of Port Arthur,” Burton said.

Davis envisions Pleasure Island visitors looking out their passenger window as they enter the island to be drawn in by the color scheme, and hopes it will draw more people to the island.

“Not just a certain group within the family. I want all of the family,” Davis said.

Work will also be done at the Disc Golf Course.

“Everything to bring the entire family back to Pleasure Island,” he said.

A start date for the playground construction was not available as of Thursday.