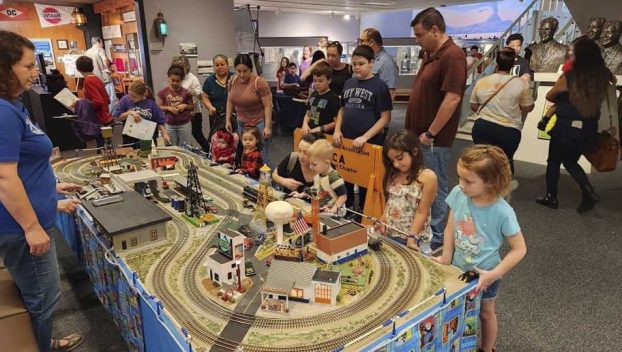 Visitors observe an elaborate model train at the Museum of the Gulf Coast's 2022 Family Fun Event on Dec. 10. (Courtesy photo)

For the staff at the Museum of the Gulf Coast, using the past is the key to inspiring the future.

“One thing that the museum has flipped what we do and the way we deliver our message is that we want the kids to get it,” said Director Tom Neal. “The kids think we’re nuts with all the stuff hanging on the wall, like the adults have lost their minds again.”

But, he said, they’ll bring them to a kiosk that tells the story of the faces and items that belong to the museum’s Hall of Fame, dedicated to people from Southeast Texas that have reached national and international influence.

“We tap the screen and up comes Kelly Asbury,” he said. “They see it and see he’s the director and animator of their playlist. We have between eight and 20 foreign countries come here, too. They can’t speak English sometimes. We show them that and all of a sudden the whole place lights up.”

Asbury, who was raised in Beaumont, worked on films such as “The Little Mermaid,” “Beauty and the Beast,” and directed “Gnomeo and Juliet.”

Being able to see that every person has a backstory, Neal said, provides an outlet.

“It gives us a quick way from getting their attention to getting them to absorb the fact that it’s vast,” he said. “It’s really a lot of people. And we want them to understand that this is a launch pad, not a dead end road. It’s some place that you can start. You can learn from people’s mistakes. You can learn from what they did well. But you know that they came from here and they went on to do these amazing things.”

The museum hosts up to five Family Fun Days each year, and recently broke records when 1,555 people attended their Dec. 10 Christmas event.

“We never saw it coming,” Neal said. “We were totally blown away by the turnout.”

“Tom scheduled it to coincide with all of the events that Port Arthur had going on that day,” she said. “There was already going to be a crowd, so we expected it to be a little bigger. But what was a lot of fun was…the struggle of finding people. You don’t want to use the same entertainers again and again, but you want to have that same sort of experience.”

With the help of a Season of Giving grant from the second annual event powered by Port Arthur LNG, staff was able to bring in a great deal of entertainment from live animals to model trains. And, of course, both Santa Claus and the Grinch were in attendance.

“The reason we do that is because it’s a service to the community,” Neal said. “Families are still living in temporary housing, and (this is) something that’s free and families can go to, and the bonus is they learn about the area and their hometown. It opens the door to a lot of things that people can take in, a lot of fun things that happen.”

Located on Procter Street, the Museum of the Gulf Coast is operated through the Port Arthur Historical Society. In addition to the ever-growing collection of notable people and Family Fun Days, they also host a variety of exhibits.

“People will come to me and ask if we’re interested, or we will come up with ideas and pursue it,” said Curator Robert Fong. “We have our own vault of stuff. When the pandemic hit, we kind of stopped bringing stuff in. All museums were in financial trouble during the pandemic. And all of them started trying to do stuff that was more local. But we like that. We like how that’s working out and we’ll probably continue that focus. We have a lot of talented people in the area.”

Neal said bringing awareness of local talent is, by large, the museum’s purpose.

“People always seem to run down their hometown,” he said. “And we seem to have a very good affinity for doing that. Every town does this. But we seem to really hammer down on it, when in fact…the talent that came from here. We ought to be shouting it from the rooftops instead of kicking ourselves in the shin.”