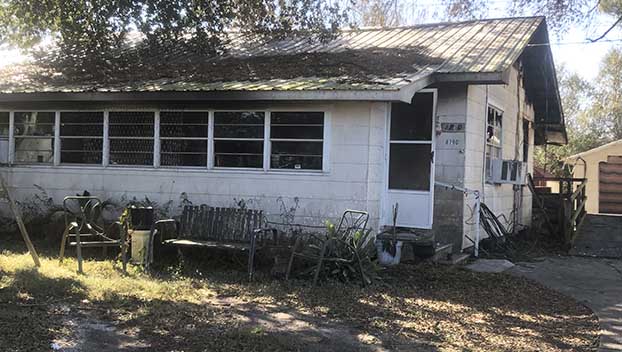 A house on Cloverdale was destroyed by a fire Saturday morning. (Monique Batson/The News)

NEDERLAND — Two separate house fires over the holidays left two people without homes and took the life of one pet.

Nederland Fire Chief Terry Morton said the first of the two was called in at 3:08 p.m. Friday for a blaze at 1036 Boston Avenue.

The homeowner was at work when the blaze began and is the only occupant of the home, authorities said.

Morton said when firefighters arrived there was heavy smoke showing and they didn’t initially find the fire until entering the home.

The fire is believed to be electrical in nature.

Morton said they believe the fire originated in the wall and extended into the attic.

The structure suffered extensive damage and there was smoke and water damage as well.

NFD received the call of a second house fire at 10:28 a.m. Saturday at 8790 Cloverdale in Beauxart Gardens.

When units arrived there was heavy fire and smoke at the rear of the single story, wood frame home. The fire extended to the attic prior to firefighters’ arrival.

The cause of the fire is undetermined, Morton said.

One person lives in the home and was not there when the fire began.

There were no injuries reported but a pet died, officials said.