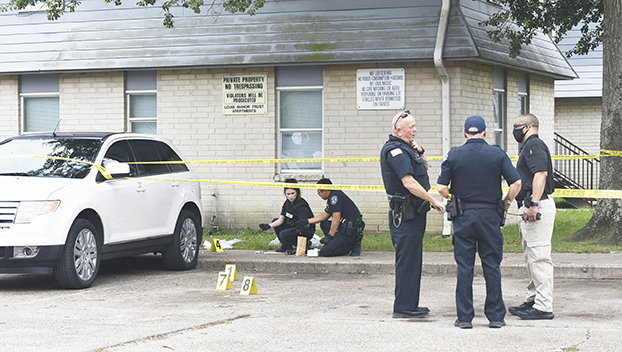 A section of an apartment complex is taped off as Port Arthur Police Department personnel investigate a local shooting in May. (Mary Meaux/The News)

A woman who was fatally shot outside a Port Arthur club in September was likely not the intended target.

Port Arthur Chief Tim Duriso said while no arrests have been made in the death of Shyene Holden, 32, who was shot and killed while outside French Connection Club on Procter Street Sept. 18, police do have a suspect.

The person has not been arrested and the case will be submitted to the Jefferson County District Attorney’s Office, he said.

Duriso said, based on information received by police, Holden was not the intended target and this may have been a random shooting.

Holden attended Memorial High School but graduated from George Bush High School in Richmond in 2008. She was enrolled in the nursing program at Lamar State College Port Arthur, according to obituary information.

Holden’s death was one of a number of killings in the city this year. Some of the homicides are deemed manslaughter and some accidental, while some were “no billed” by a grand jury. Others have alleged suspects sitting behind bars awaiting trial.

The alleged shooter in the Jan. 29 shooting of James Botley Jr., 20, outside Encore Apartments on Jimmy Johnson Boulevard was “no billed” earlier this year, Duriso said.

Botley was a 2020 graduate of Memorial High School, according to his obituary information.

Police ruled the March 25 fatal shooting of Myrick Rynell Taylor Jr., 23, accidental. No arrests were made in the shooting that happened inside of a residence at The Pointe Apartments on Main Avenue.

Taylor was a member of the Memorial High School Class of 2017 and was an employee of the Mark W. Stiles Unit for three years, according to his obituary.

Another fatal shooting deemed accidental was the Feb. 5 death of Jordan Reed, 18.

The death occurred at a home in the 1100 block of 8th Avenue. A person had been unloading a handgun and placed the weapon in an upstairs bedroom when it fired.

No arrests were made.

Questions remain about the death of Nancy Lizbeth Mendoza Chavez, 19, who died Nov. 13.

A witness saw Chavez walking along the highway in the 1800 block of West Texas 73 near the Texas 73/82 interchange, Duriso said.

Preliminary findings show Chavez had multiple blunt force injuries. Duriso said the police investigation began as a leaving-the-scene-of-an-accident case, though that is preliminary.

As of late this month police believe the death is accidental and occurred when a vehicle struck her, though police do not know why she was walking on the roadway at approximately 1:15 a.m. Nov. 13.

Chavez was a student at Memorial High School.

The search continues for the man who allegedly shot and killed Alondra Ceja-Navarro, 22, while she was sitting in a truck Sept. 5 in front of her parents’ home in the 4600 block of Alamosa St.

Ceja-Navarro was with family celebrating her arrival to the United States when the tragedy occurred.

“We are still looking for the suspect,” Duriso said, adding federal agencies are involved in the search.

A witness to the shooting told police the victim was having issues with an ex-boyfriend, who had been threatening her new boyfriend.

At the gathering, the new boyfriend was getting in his truck when a GMC Sierra truck, identified as Chavez’s, parked behind it.

Ceja-Navarro was asked to go sit in the boyfriend’s truck to help ensure nothing happened to the witness’ boyfriend.

The witness told police Chavez then reportedly pulled up to the other man’s truck and fired into the driver’s side window several times before driving away.

Ceja-Navarro was found dead in the truck.

Police are continuing to compile information in the Nov. 17 shooting death of retired firefighter Charles Quisenberry, 61.

A person was detained at the scene in the 8000 block of Tom Drive who then spoke with officers at the police station.

Duriso said the man was not arrested.

“We had a conversation with the District Attorney’s Office and they recommended we put the case together and for it to be presented to the grand jury,” Duriso said.

The alleged shooter was not named by police but is a retired Beaumont police officer.

The first killing of 2022 was a stabbing where the suspect is charged with criminally negligent homicide.

Phyllis Gipson, 62, was still in the Jefferson County Correctional Facility this month on a $200,000 bond.

Gipson was at the scene when police arrived and was charged with murder then released on accusation, according to police.

She was arrested Oct. 11 on the charge of criminally negligent homicide, according to jail records.

The Jan. 21 shooting death of Marcus Freeman was under investigation for several months until the April 25 arrest of Dastacy Lawrence, 19.

Lawrence was 18 at the time of the crime.

Freeman was killed while in his vehicle outside Normandy Apartments.

Four people remain in the county jail in connection with the Feb. 18 shooting death of Christopher Thomas Jr., 20.

Thomas was a 2019 graduate of Memorial High School.

The March 11 stabbing death of Chaddric Lanes, 39, has a single suspect, Ahmad Acrond, 45, who remains in the county jail on $1 million bond.

Lanes was killed while in the 800 block of Stilwell Boulevard.

Ashton Aiken, 35, was stabbed to death June 7 while in the parking lot of a 7th Street convenience store. Police later arrested Anthony McCullar Jr., also known as Christopher Greene, 45. His bond was set at $1 million.

Willie Doyle Jr. was later indicted on a manslaughter charge in connection with the death.

A 15-year-old male was certified as an adult this month in connection with the Sept. 10 fatal shooting of Quarderious Jordan, 26 at Avery Trace Apartments.

The juvenile, identified as Khalil White, reportedly turned 16 since the ruling was made.

The case will likely be submitted to the D.A.’s office at the beginning of the year after a new grand jury is seated.

Those with information about a crime can call Crime Stoppers of Southeast Texas at 409-833-TIPS or by downloading the P3 Tips app on a smart phone. Tips are anonymous and could be eligible for a cash reward.