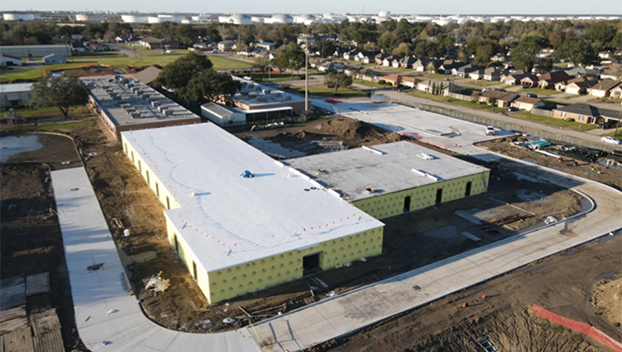 The end is in sight.

It’s been several years, many millions of dollars spent and near countless man hours, but the Nederland Independent School District’s plan to overhaul all of its campuses has a finish line.

When it comes to construction projects, nothing is ever complete until it is finally complete. So just because district leadership and construction partners are sharing final timelines, no one is close to patting themselves on the back for jobs well done.

There is still much to be accomplished.

Yet, there is also something to look forward to.

Improvements on the Langham, Helena Park, Highland Park and Hillcrest elementary campuses are scheduled to open for students in August of 2023. At the same time, fifth grade students — currently taught on the middle school campuses — begin receiving instruction at the elementary campuses.

Upgrades to Central Middle School and C.O. Wilson Middle School are expected to be ready for August of 2023, as well, when the campuses are set to serve students in sixth, seventh and eighth grades.

The good news updates shared this week set a different tone when compared to school board meetings in late 2020.

I remember a certain statement back then garnering some laughs, but Nicholas Phillips wasn’t joking when he said: “I agree it’s time. The approved signs are starting to rot.”

The Nederland Independent School District school board member delivered the line toward the end of an hour-long discussion with building and design vendors responsible for campus construction across the district.

Nederland’s elected education leaders weren’t happy at that time, but they seem very optimistic now, especially following a meeting this week, when designs were approved for the middle schools.

Superintendent Dr. Stuart Kieschnick is quick to point out the school board has been very supportive from the beginning, stressing board members just want what is best for the students.

Approved in the Spring of 2019, Nederland voters are waiting on $150 million in building and technology improvements that will touch every aspect of the Nederland Independent School District.

As we sit here at the end of 2022, Nederland community members can take stock of where they are at. They are past the approval stage and the design stage and nearing the end of the construction stage.

Openings at six campuses are planned less than eight full months from now.

That will cause some shake-up, any move of this magnitude always does.

Teachers and families used to seeing fifth graders at middle schools will have to adjust their viewpoints.

Kieschnick said there will be some movement of personnel.

“Those fifth grade teachers will have to go to the elementary school,” he said. “We’ll start on the process with that right now to lay out that plan and make it as fair as possible. The ones who want to go will have choices to go, and we’ll see how far that takes us.”

Hiccups and complications aside, a community is only as strong as its youngest generation.

Nederland ISD and all who support it had plenty to celebrate last summer when the school district received an A accountability rating from Texas Education Agency.

Should this reconstruction of educational campuses across the district hit its goals, then the difficult task of maintaining that rating might just get a little bit easier.