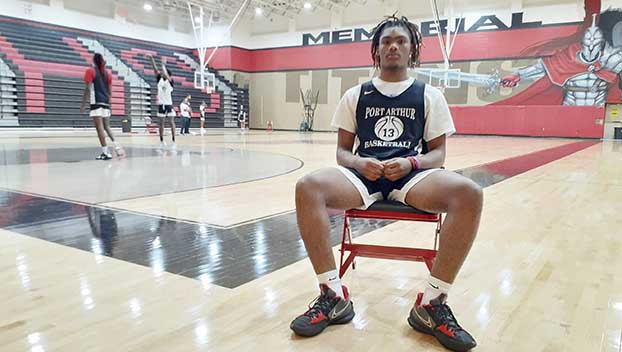 Memorial Titans coaches see a lot of potential in sophomore Cameron Bryant, who is competing in his first full season of varsity basketball. (Stephen Hemelt/The News)

Head Coach Alden Lewis acknowledges the Titans are on a three-game skid and simply trying to get back into the win column.

The last week before Christmas didn’t prove beneficial for the overall record with back-to-back loses to Barbers Hill (27-37) and Beaumont United (52-58); however, Lewis knows the best is still to come for his Memorial student-athletes.

“We started off well, and we have to pick it back up and get back on the ball,” he said. “I think we can do that in the next few games, get back on schedule and playing better basketball.”

The Titans are on their mandatory break and using the time to rest and prepare for the 2022 James Gamble Classic, which is hosted by Memorial Dec. 29 and Dec. 30 in Port Arthur.

Eight teams are competing, and the action begins at 10 a.m. Dec. 29 against West Orange-Stark.

Lewis feels the Titans are defending at a high level, but we need better play on offense.

“Guys have to step up, play their roles and live up to the expectations,” he said. “We’ll get better. At the end of the day, we’re going to keep competing, keep defending and eventually our offense will get better.”

One of the players Titans coaches feel confident about is sophomore Cameron Bryant.

The 15-year-old stands tall at 6-3, 178 pounds and credits his varsity impact to working hard in the gym a lot, perfecting his craft and playing hard.

As for his Memorial teammates, Bryant said the team’s first goal is to win district and earn a spot in the playoffs.

More is being asked of him this season, following a freshman campaign, when he was bumped up to varsity late.

“My role was playing hard, getting offensive rebounds and making plays for the team,” he said, adding the experience better prepared him for this season and a strong 2023 close.

“We’re doing way better this year, but there is still a lot to go,” according to Bryant. “We’ve got way more potential.”

Hopefully, that potential turns into strong play next week at the James Gamble Classic — “It means a lot because it is something for us back in P.A.,” Bryant said.

The sophomore joked with Port Arthur Newsmedia recently that there are lot of tall people in his family and he still has a little growing left in him.

His goal is to play Division 1 college basketball and make a run at an NBA career.

His immediate personal goals include developing his ambidextrous dribbling and scoring skills to better utilize his size to create for advantageous spacing on the floor.