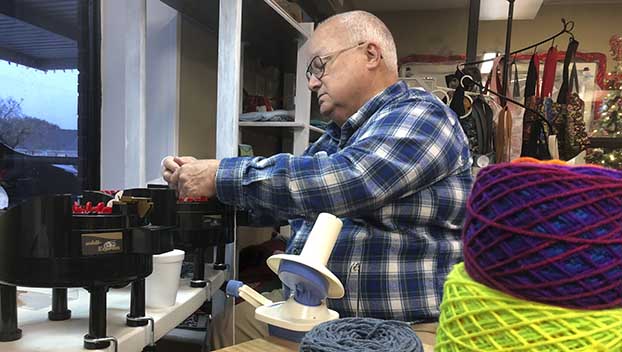 NEDERLAND — Ralph Watterson, 76, was making a hat on Monday, occasionally looking out the window of the B.A. “Booty” Ritter Senior Citizens Center and watching the rain while cranking the handle on his Addi knitting machine.

It’s something he does often, and for more than just a hobby.

“This is payback for six years of remission,” he said while working.

Watterson was diagnosed with pancreatic cancer six years ago.

“My (prostate-specific antigen level) was six,” he said. “One to four is normal.”

His doctor suggested surgery, but the Nederland man wasn’t keen on the idea. And then he was told there had been great success with chemotherapy and radiation.

After chemo, he completed nearly 50 rounds of radiation at the Cancer Center of Southeast Texas on 9th Avenue in Port Arthur.

“I tried real hard not to fall asleep. The most painful thing I had was the marking ink irritated me. I was never sick. I couldn’t tell anything different was happening,” he said.

Following a year of treatment, his doctor said his prostate-specific antigen level had reached 0.01, which is classified as undetectable.

“I said, ‘As an overachiever, can we do a negative number?’ And he said no. We’re very happy,’” Watterson said with a laugh.

And while he thanked each of his doctors, about a year ago he found an alternate way to show his appreciation.

“I was active here and found out that we have a cancer survivor walk on Boston Avenue and they gave them a hat,” he said. “So I started thinking, ‘I wonder if they have a machine to make hats?’”

He found the Addi. 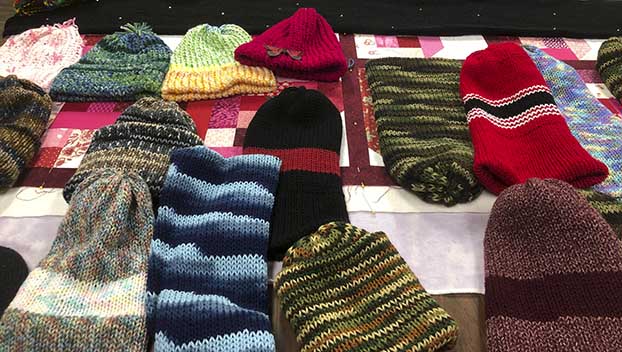 Pictured are hats knitted by both Ralph Watterson and another member of the center. (Monique Batson/The News)

“I watched the demonstration videos and thought, ‘that doesn’t look too hard. I can try that. Rather than waste my money on other things, if it doesn’t work I can waste it on that or I’ll donate it to the center,’” he said.

And now, he’s completed hundreds of hats, most of which he donates to the same center in which he received treatment.

“My dad had cancer, and my mom is the director here,” said Heather Kaiser, assistant director at the center. “My dad wore beanies all the time. He was bald for as long as I can remember. And every time we’d take him to chemo, he would give his hat away. He’d come home without a hat. So my mom was constantly making him hats, and he kept giving them away. When he passed away, that’s what she wanted to keep going on.”

Watterson and another member of the center who knits hats by hand stepped in to ensure the task continued.

The first hat got shredded.

“The thing about this is, you can be cranking on this making a hat, and then you can go drink coffee,” he said of his machine. “When you get back you can check the numbers and see where it is and keep cranking. Once you’ve done successfully, say, 10 hats, it becomes mindless.”

The retired instrument technician is able to buy a great deal of his yarn at a discount, as he has friends in the antique business that alert him when they come across an estate sale with yarn. In addition, the senior center has a great deal of yarn that has been donated by groups and individuals in the community.

Watterson’s hats are reversible to allow for different patterns, as well as long to provide additional warmth.

“Say if a person is going hunting, you can fold this stuff up and you get quadruple layers of yarn and keep your head extra warm,” he said while holding a hat he made in camo print. However, he said he wasn’t making hats for hunters, with the exception of his dentist.

Kaiser called Watterson’s hats some of the best she’s seen.

“He’s humble,” she said. “He’s the most dedicated person I’ve ever met. He puts the time in to sit down and make these hats.”

The two worked Monday in the craft room at the center on Boston Avenue, which has machines and supplies for quilting, sewing, crocheting, knitting, painting and more.

“If you want to learn to craft, you can learn it here,” she said. “We have all the supplies you need.”