FILM REVIEW — Dazzling return in “Avatar: The Way of Water” 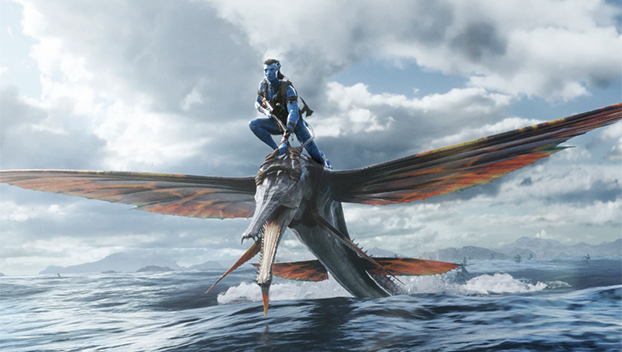 “Avatar: The Way of Water”

It’s been thirteen years since filmmaker James Cameron whisked audiences off to the world of Pandora in his box office behemoth movie, “Avatar.”

That’s a long time to wait for a sequel, but I’m happy to report that it was worth waiting for because “Avatar: The Way of Water” is another jaw-dropping movie. It’s filled with dazzling images and intriguing world building sequences, although it once again struggles with simple characters and a pedestrian story.

That is basically the same thing I said about the first movie, so I suspect if you are already a fan of that film, you’ll once again be happy with the sequel.

The basic story also stays the same. Our hero, Jake (Sam Worthington) is now living permanently in his avatar body, along with his mate, Neytiri (Zoe Saldana) and their children. Their world seems perfect until those pesky humans drop out of the sky with their war machines.

Leading the charge is a revenge-minded Col. Quaritch (Stephen Lang). Yes, I know he died in the first film, but he was resurrected and placed in an avatar body, making him stronger than ever. Jake and his family flee to a ocean-based civilization, with the bad guys hot on their trail.

It’s a simple plot, but story isn’t why audiences will want to see “Avatar: The Way of Water.” This buzz on this film is all about the visual images and the crystal-clear 3D. This is a stunning blend of cinematography, animation and production design. This is one of those films that demands that it be seen on the biggest (and loudest) movie screen available.

On the other hand, the film does clock in at a bladder-busting 192 minutes! Much of this comes from lingering shots of the world of Pandora, especially its oceans and extraterrestrial animals. Don’t get me wrong, this is fascinating stuff, but it doesn’t always have much to do with the actual story.

It’s as if Cameron made a popcorn movie and a nature documentary as well, and then crammed both movies into one big epic. These dissimilar elements struggle to coexist at times.

The same holds true for the acting, which is fine, but never quite gets past the shock of seeing these emotions coming out of the mouths of giant blue extraterrestrial creatures.

There’s an odd disconnect in my mind with the emotion expressed by these photorealistic, but non-human characters.

Ultimately, it all boils down to the same thing I said about the 2009 movie. On a technological level, “Avatar: The Way of Water” is amazing. The animation and design will take your breath away. But on an artistic level, the story, characters and emotions don’t rise to the same heights.

Still, if you’re a fan of the first film, then you will absolutely love this long-awaited sequel. And the good news is that we have several more sequels slated to arrive every other year, instead over another thirteen year wait.