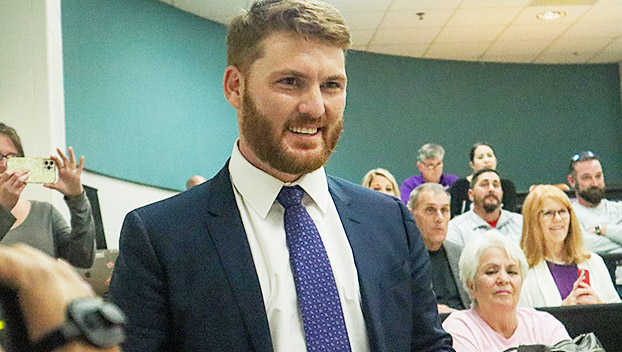 Jeff Joseph was voted in as the new head football coach and athletic director during a school board meeting in February. (Chris Moore/The News)

The speech was short and sweat.

Jeff Joseph, dressed in a sharp suit and purple tie, spoke for approximately 50 seconds Feb. 14 to a packed room at the Port Neches-Groves Independent School District Board of Trustees meeting.

He had just been named the high school’s head football coach and athletic director. He didn’t promise the world, instead opting to offer thanks for the trust given him and support he was sure to receive.

Since then, Joseph has been a man of action. Now, nearly 10 months to the day later, he has the Indians on verge of sports glory — one win from a state championship.

Veteran school board member and president Scott Bartlett said PNG’s leadership was looking for someone excited about becoming head coach and someone ready to bring a team concept to campus.

“We were very excited about his defensive mindset,” Bartlett said this week, thinking back on the hiring process. “(Joseph) has a very strong outlook on everything. That has been the big difference in the PNG Indians this year. We’ve had a really strong defensive presence throughout the year.”

He describes the 2022 football season as a wild ride, adding it is obvious the coaching staff came in with a plan.

“Every week, the team has gotten better,” Bartlett said. “They are playing for each other. It is a true team concept. Every week a different kid steps up. We have coaches who are leading these kids down the right path, teaching them that any individual can be beaten, but as a team they are unstoppable.”

Port Neches-Groves High Principal Scott Ryan remembers Joseph’s resume as “great,” noting the first-time head coach had been a lot of places where the teams won ballgames. He even picked up graduate assistant experience at Texas A&M.

Due diligence through phone calls led to a search committee impressed with Joseph’s knowledge of the game, handling of student athletes and overall demeanor.

“Ultimately, it was clear as we were interviewing that (Joseph) was exactly what we were looking for,” Ryan said. “We felt like he was the total package, and not just Xs and Os. He was somebody who was going to come to the community, be part of the community, embrace the community, be embraced by the community and do what was best for our kids.”

Ryan is honest in description of the PNG football coach as the most visible position in the community.

With that being said, he notes Port Neches and Groves are filled with hard-working people.

“We’re very fortunate, because we always feel like the high school kids, the seniors, are kind of like the superstars of the community that year,” Ryan said. “You want somebody who can take those traits from the community, have those traits and carry it over into our kids.”

Now as game day nears, the buzz on campus grows.

“The kids have been behaving very well,” Ryan said. “With pride, I can say we have more students involved in student activity then we ever have before. Not counting football, student activities are bringing 13 buses to the game filled with kids involved with the band, drill team, cheerleaders, G Crew, photo kids, video kids.

“The athletes do set the tone for the building, and when the athletes behave and act right, a lot of the kids follow. They have been role models. Credit to Jeff (Jospeh) and his staff. These were already great kids, but the culture he set out there, they are taking care of business in the classroom.”