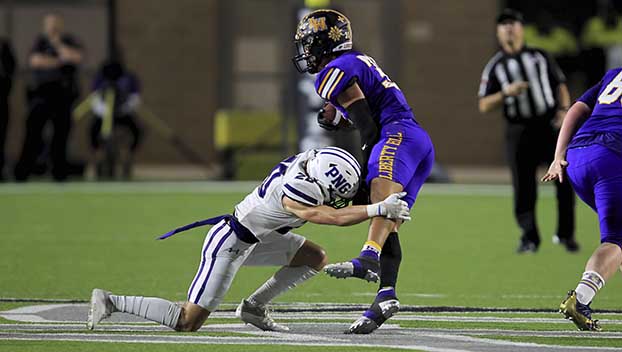 Defensive back Kameron Droddy makes a tackle on Liberty's Jaxon Hines on Friday night. (Mark Pachuca/Special to the News)

“To see those kids adapt to new systems offensively and defensively shows how much the kids believe in what the staff was doing from Day One,” Peevey said. “It always takes a bit to adjust with all the newness, but once they did, they have become a juggernaut.”

Just like PNG has been able to do this year, the Bears stormed on the scene last year and became the “darlings” on the state platform.

“South Oak Cliff reached the pinnacle under Coach Todd last season, and he’s done such an amazing job with that program,” said Peevey. “It was a thrill to see them win it last year, becoming the first Dallas-based team to win it after such a long drought. They play really well on both sides of the ball. Their defense got better and better every game last year, and they seem to be doing the same this year. Offensively, they always have a bunch of weapons.

“I think if PNG has had a similar opponent this year, it has to be Fort Bend Marshall. It’s going to be a tremendous matchup, one that could be settled in the trenches.”

The Bears have won 12 straight, cruising past their six district opponents, outscoring them 302-10. This followed a tough 0-3 start to several Texas powerhouses

“Phew, that’s a tough schedule,” said Peevey. “I saw them play Duncanville on National TV, if that tells you how good those programs are. Duncanville and DeSoto are both playing on Saturday. How many coaches can say they played a non-district schedule like that?

As for the state championship game, Peevey said there are going to be jitters when you hit the field for the first time.

“But once you get that first contact, it’s all about being a football player again,” he said. “AT&T is going to be insane come Friday night, and those Oak Cliff fans need to be aware about a purple invasion coming. The attendance is going to be crazy for that one. Get ready for it Arlington. The 409 is coming, and it’s called Port Neches-Groves, America. I’m just so happy that the Indians are representing us all at State. I think they have an excellent shot. Go Indians!”

West Orange-Stark coaching legend Cornel Thompson, who led the Mustangs to four straight trips to the Class 4A Division II State Championship games, has watched PNG a lot during the playoffs.

“They don’t make mistakes, and they have forced their opponents to get frustrated, especially with some of their big starts,” he said. “It seems like every game they take control early. That’s the sign of a cohesive unit.”

Thompson knows it’s going to be a huge battle up front when both teams have the ball.

He remains impressed with the Indians offensive.

“They have some big old boys up there, but what makes them special is that they are athletic and come off the ball hard,” he said. “Same thing with their defensive line.”

One thing for sure, laughed Thompson, Oak Cliff didn’t exactly play the “sisters of the poor” in non-district or the playoffs.

“Their district schedule tends to be a little weak, so Coach Todd, you can tell he likes to play ‘up’ in non-district,” he said. “It only helps you in the long run.”

Thompson really likes PNG’s chances, due to the Indians’ size and lack of mistakes.

“They really made a believer in me after they beat Fort Bend Marshall and got some redemption there,” he said. “They need to make sure when they arrive in ‘Jerry World’ that the atmosphere doesn’t get to them. Oak Cliff already knows what that environment is like after last year. You got to block that out and concentrate on the opponents right in front of you. I really like the Indians in this one.”