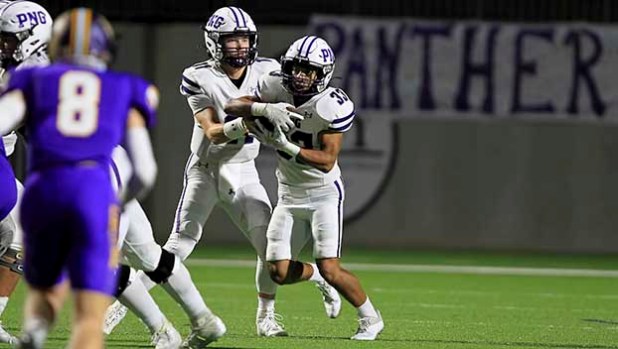 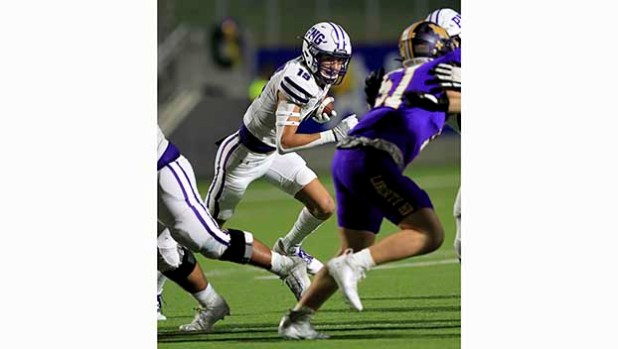 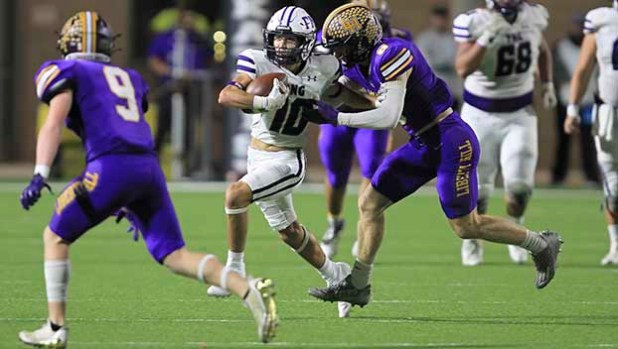 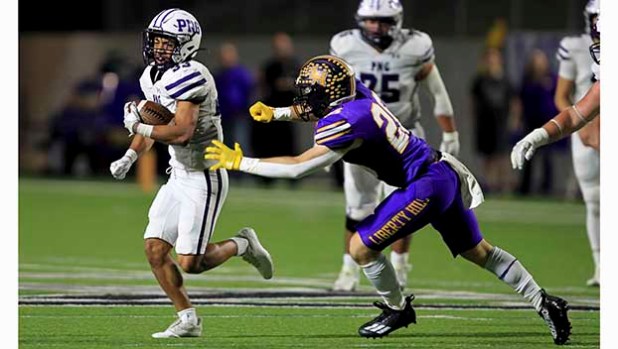 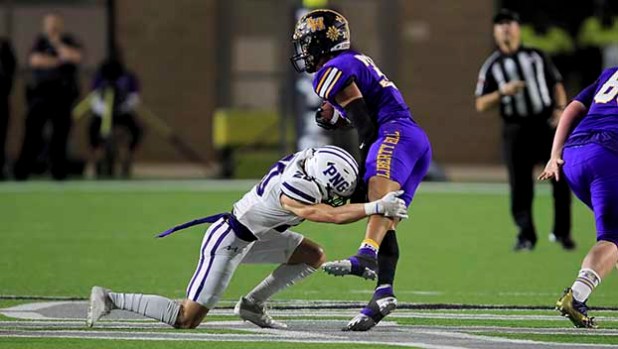 Defensive back Kameron Droddy makes a tackle on Liberty's Jaxon Hines on Friday night. (Mark Pachuca/Special to the News)

KATY – For the first time since 1999, Port Neches-Groves will play for a state championship.

The Indians cruised to a 42-14 win over Liberty Hill in a Class 5A-Division II state semifinal game Friday night at Legacy Stadium.

PNG, who is riding an 11-game winning streak, will face Dallas South Oak Cliff in the Class 5A Division II state championship game next Friday at 7 p.m. in Arlington at AT&T Stadium.

Junior Isaiah Nguyen led the way offensively with a game-high 261 yards on 31 carries. Shea Adams rushed 11 times for 23 yards and scored two touchdowns. He also caught three passes for 13 yards and one touchdown.

Leading 25-14 to start the second half, the Indians defense forced a quick three-and-out on the Panthers’ opening possession of the third quarter.

The PNG offense picked up where it left off in the first half. The Indians put together a 12-play scoring drive. Guarnere had catches of 12 and 13 yards, and Nguyen ripped off a 16-yard run. Shea Adams capped the drive with a 1-yard QB sneak to push the lead to 32-14.

The Indians added to their lead early in the fourth quarter. After stopping Liberty Hill on downs, PNG drove down inside the Panthers 5 on consecutive runs by Nguyen of 19 and 17 yards. Andres Sandoval kicked a 20-yard field goal, his third of the game, to give the Indians a 35-14 lead with 10:45 left in the game.

After stopping the Panthers on downs, PNG iced the game with another scoring drive. Adams scored on a 3-yard touchdown run with 4:07 left in the game to put the Indians up 42-14.

For the first time in a while, PNG received the opening kickoff. The Indians marched down the field and put the game’s first points on the board. Nguyen did most of the damage on the ground. The drive stalled at the Liberty Hill 19 and Andres Sandoval booted a 36-yard field goal to give PNG a 3-0 lead.

The Panthers answered right back, and in quick fashion. After their first play from scrimmage went for a 6-yard loss, fullback Ben Carter took the handoff and raced 83 yards for a touchdown. That put Liberty Hill up 7-3 with 4:58 left in the first quarter.

PNG answered right back. Consecutive runs of 13 and 18 yards by Nguyen moved the ball into Panthers territory. Crippen hit Prosperie on a 31-yard scoring strike to put the Indians up 9-7. The extra point was no good.

After the Indians defense forced a three-and-out, the offense went back to work. Crippen hit Guarnere for 46 yards. Following a 4-yard carry by Nguyen, Crippen and Guarnere connected on a 9-yard touchdown. That extended the Indians lead to 16-7.

Liberty Hill had a promising drive going on its ensuing possession. However, Jaxson Hines fumbled after an 18-yard gain to the PNG 31, which was recovered by the Indians Nick Gardiner.

PNG took advantage of the turnover, turning it into another scoring drive. Crippen and Guarnere connected on a 15-yard completion and Nguyen had a 25-yard run. Sandoval capped the drive with a 34-yard field goal to push the lead to 19-7 with 4:58 left in the second quarter.

The Panthers put together their second scoring drive of the first half. Jack Pitchford had a 35-yard run. Carter, who looked to be tackled around the PNG 15 and somehow kept his feet and raced down to the 1. Hines scored on a 1-yard touchdown run to cut PNG’s lead to 19-14 at 1:05.

Fortunately for PNG, which was just enough time for the Indians to score before halftime. Crippen hit Prosperie on third-and-10 for 40 yards to the Panthers 20. Crippen hit Shea Adams in the end zone on a fade route for a 6-yard touchdown with :02 left in the half. The Indians missed the extra point, their second of the half.

The teams went into the locker room at halftime with PNG leading 25-14. The Indians offense was dominate in the opening stanza with 338 yards of total offense, 140 rushing and 198 passing. To no surprise, Liberty Hill had 201 yards of offense, all on the ground.

THE PLAY OF THE GAME WAS…PNG’s Nick Gardiner recovering a fumble at the Indians 27. Liberty Hill was driving for a touchdown when Jaxson Hines coughed up the ball and Gardiner was there to pounce on it. That kept all the momentum on PNG’s side.

THE GAME BALL GOES TO…Junior Isaiah Nguyen, who rushed for a game and career high 261 yards on 31 carries. Senior Landon Guarnere also turned in a stellar night with nine catches for 127 yards and one touchdown.

KEY STATS…Liberty Hill was led by Ben Carter who rushed for 120 yards on seven carries and one touchdown. Jack Pitchford added 57 yards on 13 carries.

UP NEXT…PNG plays Dallas South Oak cliff next week in the Class 5A-Division II state championship game in Arlington at AT&T Stadium next Friday at 7 p.m.