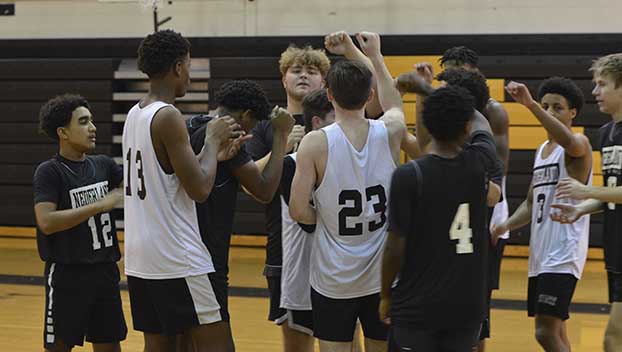 The Nederland basketball team breaks down a huddle before practice. (Chris Moore/The News)

Last year’s squad was a senior-heavy group, leaving a relatively inexperienced team this season. But that doesn’t mean Nederland is rolling over. The team started the season 5-3.

“There is a lot of learning going on,” English said. “The kids are trying to come together a little bit. We are playing pretty well. We laid an egg against West Brook. Up to that point, I had been pretty pleased. We are going to take some lumps, but we are getting better.”

English said the team’s defense is behind in the early portion of the season, but said he has been happy with how the pieces are coming together.

“We have more scorers this year,” he said. “We are just trying to get headed in the right direction.” 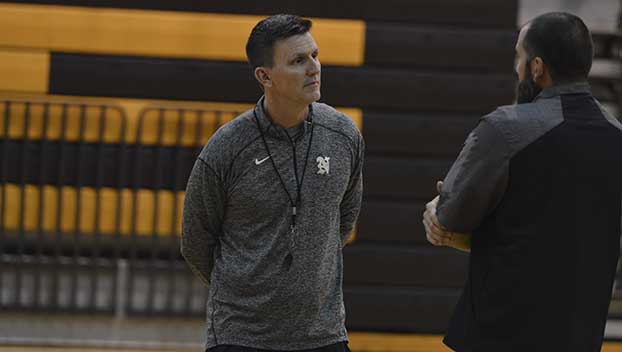 In recent years, the Bulldogs had been excellent at rebounding and defense but sometimes struggled to create shots outside of the offense.

English said senior forward Luke Harrison is a consistent force for the Bulldogs.

“He has played really well,” the coach said. “He can score inside and outside. He is our captain.”

Harrison said the team needs to communicate more on the defensive side of the court.

“We are just letting people get by us,” he said.

The senior wants his team to make, at least, the second round of the playoffs.

English said Tanner Tillie has also chipped in on the offensive side. The junior brings an outside presence as a scoring threat.

“We have adapted pretty good,” he said. “We have a long way to go but we are moving pretty well. I am trying to get the perimeter game going so people can get in the lane and get some baskets. I am just trying to give them space to shoot.”

Tillie said his goal for the season is to be a good teammate and make the playoffs.

That path to the playoffs could be a bit easier this year after 5A state champion Beaumont United moved from the district and into the 6A ranks. However, the district is packed with plenty of talent and teams vying for those four spots.

“We are improving,” English said. “We haven’t peaked, yet, I don’t think. Hopefully, here in a couple of weeks in our first district game, we will be where we want to be.”