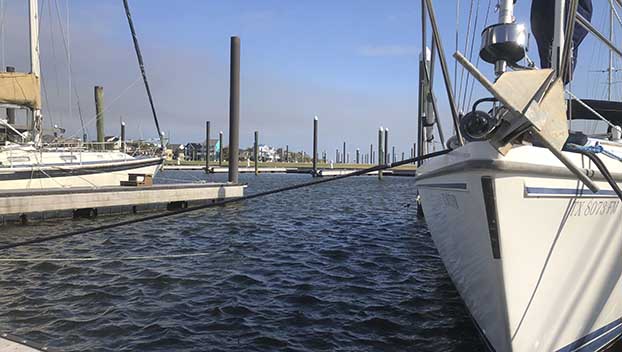 Sam Showalter, who has been a member of the Port Island Yacht Club since its inception, has had his boat Trilobyte docked in the marina since 2003 with previous boats there dating back 50 years. On November 27, he moved it to a private storage unit after receiving notice that his monthly slip rate would increase from $180 to $315.

“The previous island director didn’t raise rates,” Showalter said. “The marina is mostly empty. If you have a fairly empty marina, raising rates doesn’t get you more boats.”

Pleasure Island Director George Davis, who was appointed to the position last year, said the lack of increased revenue at the marina has hindered progress on the island.

“This is long overdue,” Davis said. “And as I also explain to people, in order for us to progress and get things done on the island…we can’t do it if we stay stagnant and do the things we’ve been doing.” 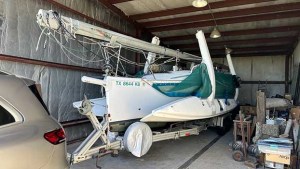 Sam Showalter’s boat Trilobyte has been docked at the Port Arthur Marina since 2003. He moved it on November 27 to an indoor storage unit while searching for a new home due to a slip rate increase. (Courtesy photo)

“What we found from the audit, as well as going back and looking at historical data, there wasn’t a price increase in the Port Arthur marina in the last 11 years,” Davis said. “It’s like I explained to the people that have come by, called, emailed, texted; it’s more like a sticker shock right now because they haven’t seen anything in 11 years.”

Upon receiving the letter from the city, Showalter emailed both Davis and the office of the city manager.

“Hopefully Port Arthur will reconsider this unjust and poorly presented slip rate increase,” he wrote in one email. “Trilobyte has been raced in various races all along the Gulf Coast and other places for the last 20 years and is well known and respected as is the goodwill we have generated about Port Arthur.”

“People are leaving in droves,” she said. “It was really a ridiculous decision.”

According to information from the Port Arthur Convention and Visitors Bureau, the marina can accommodate 300 boats and offers a fueling station as well as permanent or seasonal availability.

“What I did was take an average, and because we had the lowest rate out of all of them, our low rate even helped the average,” Davis said. “And our price is still cheaper than the majority of those that were in the comparison. Anyone who asks, I’m willing to show it. I’m very transparent.”