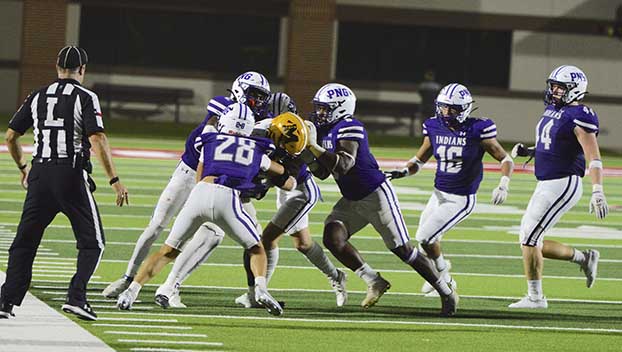 Port Neches-Groves Head Coach Jeff Joseph said his team has quite the task on its hands in trying to slow down the Liberty Hill offense.

The PNG defense has played outstanding this season, doing well against some of the top offenses in the state. In the second round of the playoffs, the Indians held LBJ Austin to 19 points after the team averaged approximately 70 all season. The PNG defense stepped up again against a Fort Bend Marshall team that had been averaging more than 50 points per game and was held to 21 in last week’s win.

This week is different, if for no other reason then Liberty Hill running an offense that is not seen much anymore. The Panthers run the Wing-T, which is a run-heavy scheme designed to keep defenders guessing with a lot of misdirection.

Those familiar with Southeast Texas football see this concept in action each week from the Vidor Prates.

But to say Liberty Hill simply runs the Wing-T is an understatement. In fact, the Panthers are seen as the gold standard for the offense, and coaches who run it often travel to Liberty Hill on a yearly basis to get pointers. Vidor Head Coach Jeff Mathews is one of them.

“I have been the last five or six years (to Liberty Hill),” Mathews said. “We have gone about eight or nine times all together in the last five or six years. It all started with a guy named Bruce Bush. His main guys restarted it at Liberty Hill, and they have taken it to the next level. They have evolved it a little bit more and made it the culture. Everything they do is centered around being successful in that offense.”

Mathews said the culture is the key to the Panthers’ success.

“Last year, they played for the state championship and we were able to go,” Mathews said. “We were there that week. You looked at that offense and they had one guy who weighed about 200 lbs. They are little bigger now. I talked to some of the coaches this week. You watch them on film and they work them to death. They are little bitty, but they think they can beat anybody.”

Joseph said the hardest part about preparing for the Liberty offense is trying to practice for it.

“It is hard to work on it when you can’t do it the way they run it,” Joseph said. “They are so good because of the pace at which they run it. They operate so quickly and efficiently. They hide it so well on the backend, because the quarterback is so sound with his fundamentals and so quick. They are very skilled.”

The scheme has worked for Liberty Hill, which has been a powerhouse over the past two decades. The Panthers have played in seven semifinals since 2004 and four state championship games. Liberty Hill won 4A titles in 2006 and 2007 and lost in 5A-II in 2018 and last season.

Mathews said the culture of the team extends into the town.

The scheme requires plenty of discipline and forces players to do very specific jobs very well. Mathews said kids begin to buy in to the point that many fall in love with their specific jobs.

“A couple of years ago, their fullback got hurt and couldn’t play, so they moved a guard to fullback,” Mathews said. “The guard was mad. He didn’t want to play running back. He wanted to play line. Normally when you move a lineman to running back, they are happy. They said he teared up in the office. He wanted to do what was best for the team, but felt he was better at guard.”

The machine that is the Liberty Hill offense runs well enough that the team could lose its top-2 rushers last week and still churn out 63 points. Entering the game, the leading rushers had a combined 3,000 rushing yards and 30 touchdowns on the season. Panthers quarterback Reese Vickers picked up the load last week with a 244-yard performance. Prior to that game, Vickers only had 325 yards rushing on 53 carries for the season.

Mathews said he is rooting for both teams Friday. He has plenty of friends who coach for both teams and said he will definitely be wearing purple, but added that he might have a shade for both schools (the Panthers are also purple).

“I’ve asked if I could just sit in the end zone so I don’t have to pick a side,” he said laughing.

Mathews said he believes the game will be high-scoring.

“It could come down to the last team with the ball wins it,” he said.