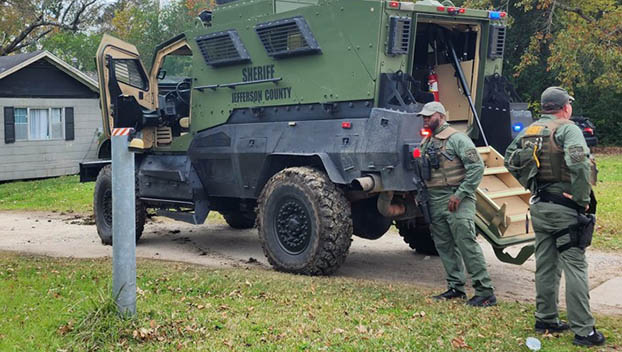 The Jefferson County Sheriff’s Office released this photo Friday after a raid by detectives and SWAT personnel.

Friday at approximately 2:30 p.m., Jefferson County Sheriff’s Office detectives and SWAT executed a search warrant at a residence in the 8600 block of Phelan Boulevard in Beaumont.

The search warrant was related to a series of auto burglaries that occurred the previous weekend in the Hamshire-Fannett area and in Bevil Oaks.

Deputies arrested two people believed to be responsible for the auto burglaries and subsequent use of some of the stolen credit cards, as well as made an unrelated arrest of another individual with outstanding traffic warrants.

Detectives conducted a search of the residence and vehicles in an effort to recover some of the stolen property.

“We would like to thank BISD PD and Beaumont PD for their assistance in this investigation,” a JCSO statement read

“This investigation is in the early stages and ongoing at this time. If your items were recovered, detectives will be contacting you next week. No additional information is available at this time.”