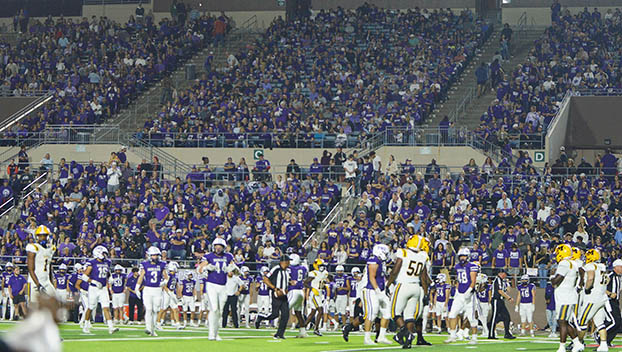 “I really don’t think it will settle in for a little while.”

“We are at an emotional high right now,” he said. “We went out and executed our game plan. The kids played unbelievably hard and with great effort.”

Joseph, in his first year as head coach, is leading PNG to heights rarely seen in the program’s long and proud history.

“It’s a true testament to them and to who they are as people,” he said of his players. “I walked into a good situation with a lot of amazing seniors who’ve really given me a chance and bought in to what we’ve been trying to do around here. It’s starting to show up here late in the year.”

Friday’s win was a big change from earlier this season, when Port Neches-Groves fell to the Buffs, 35-14, in the first district game in September.

“Offensively, the last time we played them we felt we tried to do too much,” said Joseph. “Tonight, we leaned on who we are at our core, and what we’ve gotten better at as the year’s gone on. We got the ball to our playmakers.

“Cole (Crippen) made big throws when we needed him to make big throws. Isaiah (Nguyen) ran the ball well and our offensive line blocked their tails off. When we can do that, we’re a dangerous team.”

Nguyen rushed for a game-high 146 yards on 26 carries. Crippen completed 9 of 16 passes for 133 yards and one touchdown.

“We went into the game with a plan to try and limit the stuff on the outside as much as possible, knowing how much speed they have, and we tried to crowd the quarterback when he runs around,” said Joseph of the team’s defensive plan.

“Their quarterback is so difficult to tackle. He’s probably the best player in our district this year. Coach McDaniel and his staff had the kids coached up, and they played so hard. Effort covers up a lot of mistakes and they played with great effort all night and kept them from making too many big plays.”