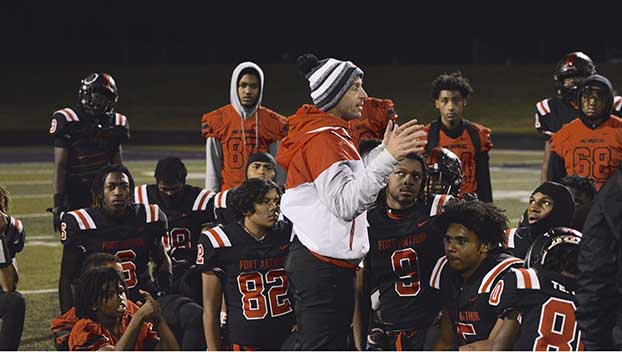 After the Memorial Titans’ loss to Longview, Head Coach Brian Morgan brought his players to the center of the field one more time.

Many of them had tears in their eyes, while others fought them back.

For several players, it would be the last time they walked off a football field in uniform. Morgan’s message was simple.

He told them he was proud of them, not just for the incredible season that ended with an 11-2 record, a third consecutive district championship and a trip to the third round of the playoffs.

“We wanted to make sure and thank the seniors for the hard work they showed over the four years,” Morgan said of his message to the team. “They had a solid senior season and did everything we asked them to do. To the young guys, we want them to understand that everything they did in the offseason and during the year to get to this point still wasn’t enough tonight. If you want to go further, we understand everything we’ve done, we have to do better. We’ll do that.”

The Titans’ had notable wins against Port Neches-Groves in the season opener and wins over Barbers Hill and Crosby. Memorial’s lone regular season loss came at the hands of Baytown Lee in a week where a large portion of the team missed a full week of practice due to a flu outbreak.

Even with the loss, the Titans won their third consecutive district title. Over the pass three seasons, Memorial has gone 28-6 with a 2-3 playoff record. The Titans ended the season with the top-ranked offense led by quarterback Davion Wilson and receiver Caleb Goodie.

The defense, which also ranked at the top of the district, was led by corner Jelani Chevalier, safety Daevon Iles and linebacker Darrell Thornton.

The Titans won their first playoff game since 2017 with a 48-41 win over McKinney North in the first round of the playoffs. The win was also the first playoff victory for Morgan since he took over the program.

Memorial then went on to play in a 52-50 classic against Frisco Wakeland in a game that went to four overtimes.

Morgan said the loss to Longview came down to turnovers at crucial moments in the game.

“We knew they were a tough team and we would have to play a clean game against them,” Morgan said. “We had some momentum in the first half. When you play really good football teams, you have to hit on your stuff. We had a big drop and fumbled the ball. It is the little things like that against championship-caliber teams that make you lose.”

The coach said the game has the potential to propel the program forward.

“That might be the best team in the state,” he said. “If you look at that first half, our kids know we aren’t that far behind. We just have to get back to work… We like were we got this year. It wasn’t the ultimate goal, but it is a sign to these young guys that these are the steps we need to take and we will get ready for this offseason.”