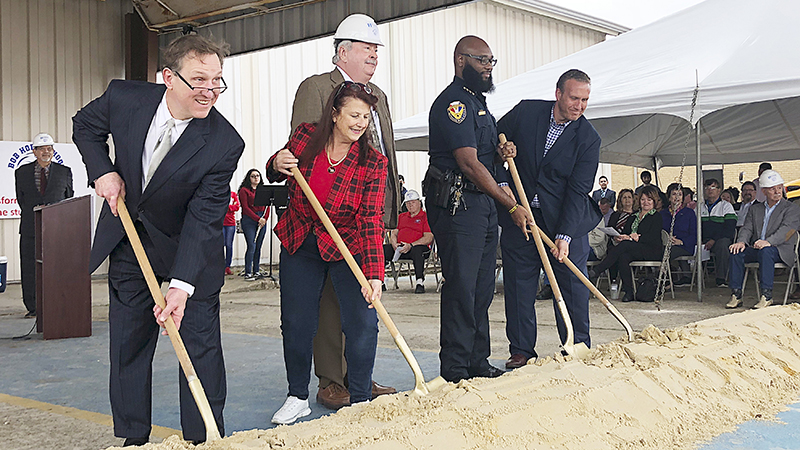 It was 100 years ago in 1922 when a small seed was planted in the minds and hearts of Port Arthur, Texas, which would grow deep roots as the years went by and then blossom into what became known as the Hughen Center.

The concept of a unique school evolved out of a concern and a need for educating those with physical and related disabilities. These individuals were labeled as “crippled,” a term outdated today but used in the past.

At the time, there was no special education in public schools. The concern predated the first federal law in 1975 regarding a free and appropriate education for all.

It was through the vision of the Rotary Club of Port Arthur and the actions of The Port Arthur Society for Crippled Children that a project was spearheaded to meet the educational needs of the children. This resulted in the very first class in March 1937 of a handful or two of children in one room at the former St. Mary’s Hospital.

Here, the children not only had their educational needs met, but their therapeutic needs, as well. On Oct. 17, 1937, the Hughen Center, named after Thomas W. Hughen who gifted a piece of property for a school to be constructed, came to fruition with the establishment of The Thomas W. Hughen School for Crippled Children.

The Center served many individuals with physical disabilities throughout the years, and various services were provided, all to benefit the children. Physical, occupational and speech therapy were offered along with a heated therapy pool, funded by the efforts of performer, Jimmy Durante.

Dormitories were added to allow living quarters for those coming from outside the area. The humble one-room beginnings had grown into a fully functional center with supportive services that drew individuals from around the world.

Many memories were made over the last century at the Hughen Center, and a number of notable figures supported its mission and the children. One of those was comedian and entertainer Bob Hope, of whom Bob Hope School is the namesake.

Longtime BHS board members Bobby Simon, James McDuffie, and Al Agudelo met recently to talk about those years and the recollections elicited smiles and laughter from the trio.

Mr. Simon worked in law enforcement and served as executive protection for Mr. Hope and his entourage during Hope’s many fundraising visits to the Hughen Center. The fundraising events included golf tournaments, bowling tournaments, as well as a 24-hour telethon in Houston.

“We had a great bunch of guys come down, professional football teams, baseball teams. It benefited the Hughen Center terrifically,” remarked Simon.

Mr. Agudelo attended the center from 1979-1986 and recalls using the Jimmy Durante pool, also known as the Inka Dinka Doo pool, for therapy.

James McDuffie volunteered his time to take the Hughen children on numerous outings just to give them opportunities and gain experiences they never had. The children always looked forward to these. “As long as they needed help, we would help them,” McDuffie stated.

Much has progressed over the seasons since 1922. The Hughen Center has branched out and is now the charter holder for the Bob Hope School, which began in 2010 with 250 6th through 12th grade students.

The district now has 2,500 students in PK3 through 12th grade across four campuses in Port Arthur and Beaumont.

The deep roots that have anchored the Hughen Center in place in Jefferson County have spread and are now extending to the East Harris County area. The district’s newest campus, Bob Hope School – Baytown, is scheduled to open in August 2023.

As Mr. Agudelo stated, “We have really grown. The decisions we make as a school board are rewarding because we help the younger generation. Just to help the kids is rewarding.”

Dr. Maryann Lopez is the chief academic officer for Bob Hope Schools. She can be reached at maryann.lopez@bobhopeschool.org or 409-983-3244, ext. 523.