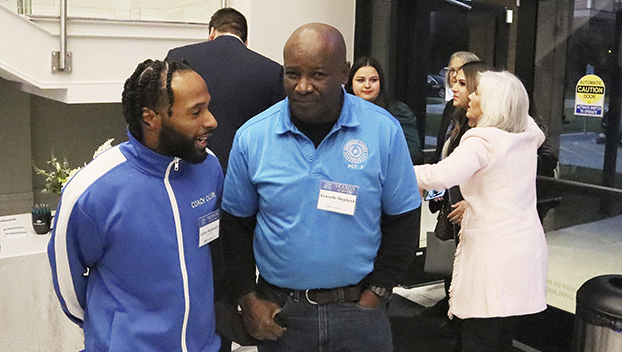 Christmas came early for Lion Hearted, a Port Arthur-based non-profit, by way of a $3,000 grant from Port Arthur LNG’s Season of Giving.

Lion Hearted was one of 18 groups, all of which were 501c3, to receive grants during the event. The organization serves ages 8 and up with emphasis on 8-20.

Lion Hearted is making sure to get the most out of their grant, sending a few kids to play football in Florida and helping pay for a young boxer’s trip to a tournament. The money will also help fund a giveaway the group is looking to make an annual event.

“This year, we have one kid going to Lubbock on Dec. 3 for a boxing tournament,” Sheppard said. “We have two more going to Orlando for football. In late December, we have one going to the National Silver Gloves tournament in Wichita, Kansas. We are doing a Christmas giveaway Dec. 1 at our Beaumont facility.”

The president said the group tries to support the kids that also play other sports when they are not boxing.

“In boxing, you don’t have a season like other sports,” he said. “We have some that box and then go play football in football season. We want to support them, too.”

Sheppard said the group will give away boxing gloves and other equipment that has to be replaced frequently.

“We have a lot of low-income kids and we usually pay for it,” Sheppard said. “We will also have a little cookout at the gym in Beaumont, too.”

Sheppard said the organization’s main focus will always be Port Arthur and added that Lion Hearted is trying to extend its reach.

“The Lion Hearted Boxing Academy will always be in Port Arthur, but the non-profit Lion Hearted is going to expand throughout the Golden Triangle,” he said.

Sheppard was thankful to hear that the group received the grant.

“We were limited on funds, which is why we only registered one boxer for the tournament,” Sheppard said. “We usually take three or four, but you have to think about food and hotel. We didn’t have the money at the time. We learned about getting the grant the day after the last day of registration. We really appreciate the grant. We are going to put the funds to good use. I am already excited about it.”

Those looking for more information about Lion Hearted can reach out to Sheppard on his personal Facebook page.