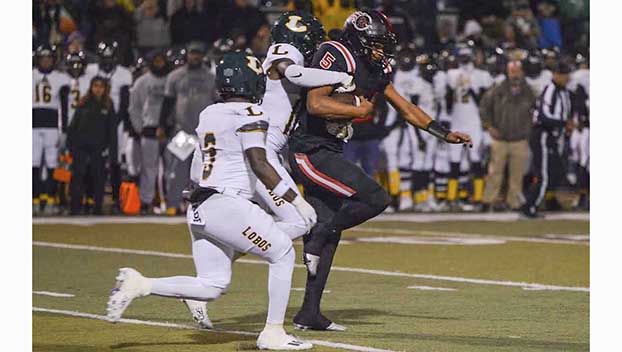 Memorial Quarterback Davion Wilson (5) holds on to the ball during Friday’s game against Longview in Lufkin. (Chris Moore/The News)

Penalties and turnovers were too much for the Titans to overcome as Memorial fell 51-7 to Longview in the 5A Division I Region II Semifinal at Abe Martin Stadium in Lufkin Friday.

The Titans (11-2) started off hot, scoring on their opening drive on a 34-yard pass from Davion Wilson to Caleb Goodie.

The Titans were feeling good early as the defense forced a turnover on downs when the Memorial defense stuffed the Lobos (13-0) on a fourth and short.

With a chance to go up two scores, Wilson fumbled the ball while scrambling, giving the Lobos the ball deep in Memorial territory. The Titans’ defense was able to hold, forcing Longview to kick a field goal to make the score 7-3 in favor of Memorial.

The turnovers continued to haunt the Titans as Wilson was picked off on the first play of the ensuing drive, giving the Lobos the ball inside the Memorial 10. Longview would score a few plays later to take the lead 10-7.

For the third consecutive drive, the Titans ended with a turnover as Wilson was sacked and stripped, giving the Lobos the ball near midfield.

In the second quarter Longview beat Memorial deep for a 49-yard TD pass to give them a 16-7 lead after the Lobos botched the extra point.

The Titans had a chance to answer back when Goodie slipped behind the Longview defense, but the ball slipped through his hands, preventing a would-be touchdown. The Titans turned the ball over on downs a few plays later, giving the Lobos the ball back with just over a minute left in the first half.

Longview put together another impressive drive that ended with Tatum catching a 34-yard pass for a TD with 12 seconds left in the half to make the score 23-7 at halftime.

A Memorial offense that seemed unstoppable all season had a hard time sustaining drives. The Titans averaged well over 400 yards of offense for the year, but were held to under 300 yards Friday.

The second half didn’t go any better for the Titans, who watched Longview drive the field on the first possession of the third quarter for a touchdown on seven-play drive that ended with an 18-yard run up the middle to make the score 30-7.

After a three and out my the Titans, the Lobos connected on a 53-yard touchdown pass to make the score 37-7 with 8:21 left in the quarter.

The Lobos scored two more times as they tried to run out the clock with the last score coming with 2:44 left in the game.

With 12 seconds left in the half, Tatum got behind the Titans secondary to put the game at 23-7. The TD put the Lobos up three scores, allowing them to run the ball, which they do best.

The Lobo’s defense held Memorial in check for the majority of the night. The unit’s speed matched up well with fast Titans offense.

Goodie finished with 98 yards receiving and one TD. Longview also dominated the time of possession.

Longview will advance to play Timberview in the Regional Final.