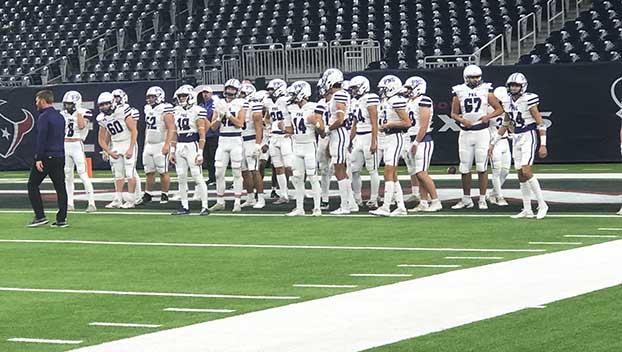 The PNG Indians take the field at NRG Stadium in Houston. (Daucy Crizer/Special to The News)

HOUSTON – Port Neches-Groves turned the game over to the offensive line and its stout running game, which carried them to a 38-28 win over Brenham in the Region III Class 5A-Division II semifinals at NRG Stadium Friday night.

With the win, PNG will face Fort Bend Marshall next week for the Regional III championship and a spot in the state semifinals.

“They played tough, they played hard, and they played with great effort,” said PNG coach Jeff Joseph of his team after the game. “They were prepared. I tell the guys all the time, you don’t win games on Fridays, you win it on Monday, Tuesday, and Wednesday. That’s where we won this game, with the way we prepared and practiced.”

The Indians, who extended their win streak to nine straight games, advanced to the fourth round for the first time since 1999. It also marked the first time PNG has beaten Brenham in the playoffs after dropping the previous two meetings, the last of which was 27-21 in 2009.

Junior Isaiah Nguyen, who had been nursing a leg injury, came back with a vengeance Friday and turned in his best game of the year. He led all rushers with a game-high 147 yards rushing on 25 carries and three touchdowns.

“Any time you can get the running game going like we did tonight, that’s a good thing,” said Joseph. “That’s the strength of our team and that’s what we’re going to lean on. Isaiah ran his butt off and Cole made some clutch throws when he needed him to.

“Isaiah played awesome. He’s been banged up for a while. He’s an unbelievable team guy. He’s our best pass protector. He does so many things for the team besides carry the ball. Tonight, it was his role to carry the ball and he had the hot hand.”

Leading 28-7 at halftime, PNG received the second half kickoff and marched down the field for another score. A steady diet of Nguyen on the ground did the damage. Nguyen capped the drive with a 3-yard TD run to push the Indians lead to 35-7 with 8:36 left in the third quarter.

Brenham respond back with a pair of scoring drives to close out the quarter. A 31-yard kickoff return by Reid Robinson set up the Cubs at the PNG 31. Rylan Wooten hit Robinson for a 31-yard touchdown pass to make the score 35-14.

After forcing a PNG punt, Brenham put together another scoring drive. Wooten had a 31-yard completion to Robinson on fourth-and-one to keep the drive alive. Wooten hit Datavian Neal Franklin for 17 yards. Wooten capped the drive with a 14-yard touchdown run to pull the Cubs within 14 at 35-21.

PNG responded with a scoring drive early in the fourth quarter. Crippen hit Landon Guarnere for a 34-yard completion to give the Indians first-and-goal at the 10. The drive stalled and PNG had to settle on a 21-yard Andres Sandoval field goal to extend the lead to 38-21 with 7:41 left in the fourth quarter.

Brenham added a late score. Wooten completed four consecutive passes, hitting Robinson for 10 and 12 yards and Cartelle Brown for 14 and 28 yards. Wooten capped the drive with a 4-yard touchdown pass to Ian Stelter with 3:24 left in the game. PNG still led 38-28.

The Indians were able to convert a pair of first downs on runs by Nguyen and Adams to run out the clock as the Cubs ran out of timeouts.

“It’s everything,” said Joseph when asked what it means to get to the fourth round of the playoffs. “It’s why you play, to win playoff games. We get to go play December football. It’s an unbelievable experience and it’s the first time in 23 years that PNG has been to the fourth round of the playoffs. The community showed up tonight and they’ll show up for us next week.”

Brenham received the opening kickoff and marched down the field in four plays to post the game’s first score. Wooten hit Jaylon Ward on 16-yard screen pass. Wooten followed with a 63-yard run to the PNG 1. Ricky Brown scored on a 2-yard TD run to take a quick 7-0 lead with 10:50 left in the first quarter.

PNG picked up one first down but was then forced to punt on its first possession. Wooten fumbled three plays into Brenham’s ensuing drive, which was recovered by PNG’s Peyton Broom at the Brenham 27.

The Indians took advantage of the field position. Adams rushed five straight times, including an 18-yard run to the Cubs 3. Adams scored three plays later on a 1-yard TD run to tie the game at 7-7 with 5:52 left in the first quarter.

The PNG defense forced a three-and-out on Brenham’s next possession. Nguyen posted a 12-yard run to get the Indians drive going. Crippen hit Prosperie with 27 yards to the Brenham 33.

Crippen followed with a 15-yard completion to Landon Guarnere. Prosperie took a pitch and raced to the Brenham 8 for first-and-goal. Nguyen scored two plays later on a 5-yard TD run that gave PNG it’s first lead of the game at 14-7 with 1:39 left in the first quarter.

Brenham’s Keith Crawford fumbled the ensuing kickoff, which was recovered by the Indians Kameron Droddy at the Cubs 17. Nguyen scored four plays later on a 7-yard TD run to push PNG’s lead to 21-7 on the last play of the first quarter.

PNG put together the only scoring drive of the second quarter. After Crippen was sacked for a 5-yard loss, Nguyen followed with a 16-yard run to kickstart the scoring drive. Nguyen and Adams exchanged carries to the Cubs 25.

Brenham was trying to put a scoring drive together before halftime. Wooten hit Ian Stelter for 13 yards to the Cubs 42. The drive was thwarted a few plays later when Dylan Lawless intercepted Wooten with just :07 left before halftime.

Kameron Droddy recovering Keith Crawford’s fumble on Brenham’s kickoff return late in the first quarter. PNG just scored to take a 14-7 lead. The fumble recovery gave the Indians the ball at the Brenham 17 and Isaiah Nguyen scored on a 7-yard touchdown run to push the lead to 21-7 and put the Indians in control of the game.

Junior Isaiah Nguyen who rushed for a game-high 147 yards on 25 carries. He also scored three touchdowns and helped the Indians control the game on the ground.

Key stats…
PNG’s Landon Guarnere hauled in three passes for 53 yards. The Indians rushed for 266 yards to go along with 128 yards passing for 394 yards of total offense. Brenham’s Rylan Wooten completed 15 of 25 passes for 220 yards and two touchdowns. He also rushed for 136 yards on 15 carries and one touchdown. Reid Robinson caught five passes for 92 yards and 1 TD and Ian Stelter had 52 yards on five catches and 1 TD.