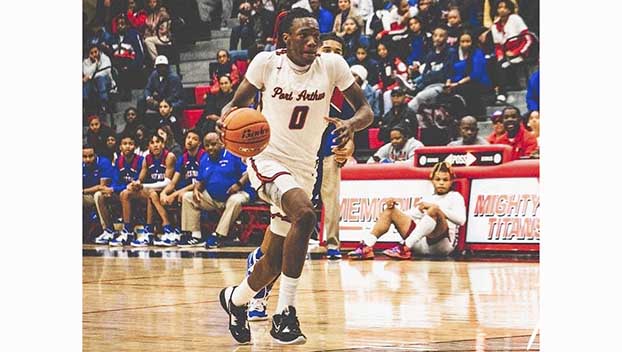 The Memorial Titans basketball team entered the season focused. No one on the team has played in the postseason, but the expectation this year is a deep playoff run.

And the Titans are on the right track, starting the season 3-0 with impressive wins over West Brook and Silsbee.

“We are happy to be back at it,” Head Coach Alden Lewis said. “It has been a long offseason. The kids have been working hard every day. It is good to see the kids back at it and competing against other teams.”

Lewis said he thinks his team has played well early on, but sees plenty of room for improvement.

“We are better now than we were last year at this point,” he said. “We have some guys coming back with some experience. They are starting to understand what we are doing and getting better and better each game.” 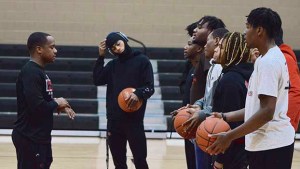 Memorial coach Alden Lewis talks to his team during a shootaround before a road game. (Chris Moore/The News)

The Titans are leaning on a group of seniors led by standout Ke’Andre Jones, who is coming off a 5A state championship for the high jump. Jones said the state title has made him hungry for more success on the court.

“I saw it in track,” Jones said. “I didn’t really expect to. I really want to see it in basketball.”

Jones is starting the season averaging 24 points per game over three contests.

“I feel like we are starting to put everything together,” Jones said. “We are doing everything coach asks us to do. When we do that, we will come out successful. We just have to play within the offense.”

Lewis said the leadership is strong on the team and added he feels like the Titans have the right mix of experience and talented youth.

“They are going to take us as far as we will go,” Lewis said of his senior group. “We have a good group and if they play their part, everyone will feed off of them.”

Jones said the team’s first goal is to win district, then make their way to the state tournament.

The Titans won’t have too many players come over after the football season ends. Lewis said he is expecting 2-3 players to fall into the rotation, but added he is OK with them taking as long as they need. The Titans’ football team is in the third round of the 5A Division I playoffs.

The path to winning district is a bit easier for the Titans than it has been in years past. Beaumont United, who won back-to-back 5A state titles, has moved out of the district and up to 6A.

Memorial still plays the Timberwolves in the non-district schedule Dec. 21. The games between the two programs have been a rivalry since BU formed.

The Titans will play four games over the two-day span. Lewis said there will be seven or eight teams participating.