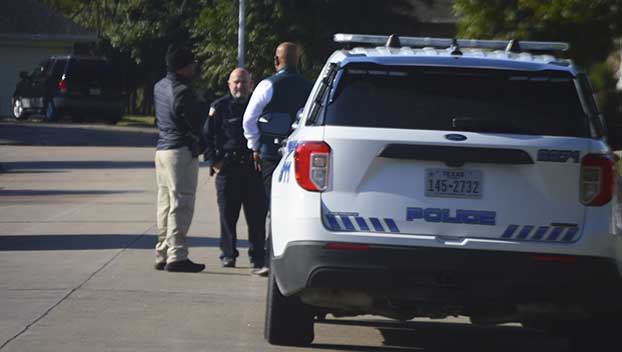 Police are pictured at the scene of a Nov. 17 shooting. (Mary Meaux/The News)

The case involving the fatal shooting of a retired Port Arthur firefighter is expected to be submitted to the Jefferson County District Attorney’s Office near the end of the week.

Port Arthur Police Chief Tim Duriso said the department is working on the case, speaking with witnesses and reviewing video from the shooting.

Duriso said there was a discussion with the D.A.’s office on the day of the shooting and the suggestion was to send the case to them.

Retired firefighter Charles Quisenberry, 61, died from a single gunshot wound to his chest outside his home in the 8000 block of Tom Drive on Nov. 17.

The alleged shooter’s name has not been released because charges have not been filed against him, Duriso said.

It is known that the alleged shooter is a retired Beaumont police officer and, according to social media posts.

Duriso said two guns were involved in the altercation and detectives are trying to make the determination on who was in possession of the second firearm.

Police are not discussing a potential motive at this time, but said the shooting stemmed from a dispute or disagreement.

Assistant District Attorney Waylon Thompson did not speak directly on the case but, in general, explained the steps once a case is submitted to the D.A.’s office.

He said typically when police complete their investigation they bring over all of their paperwork, including any offense reports, probable cause affidavit and forensic information. Then Cory Kneeland with the intake division of the D.A.’s office reviews the paperwork to see if there is enough probable cause to file the case. He has two options — file the case or submit the case for the grand jury’s consideration.

Thompson, who has not read the file on the shooting, said no felony case would ever go to trial without the grand jury process.

Port Arthur Mayor Thurman Bartie said he has been briefed on the actual shooting but is not privy to information on the case, as it is still an ongoing investigation.

He offered his condolences on the loss of the former city employee and gave the same sentiments for the person who is the alleged shooter, in that this person was likely affected by taking a life.

Quisenberry served with the Port Arthur Fire Department for 30 years, having hired on in 1980 and retired in 2010, according to an official with the department.

He spent a part of his career on the ladder truck, and for a period of time worked as one of the department’s arson investigators. He spent 16 years as a battalion chief.

Services for Quisenberry are being handled through Melancon’s Funeral Home.