Titans playoff classic not settled until deep into overtime 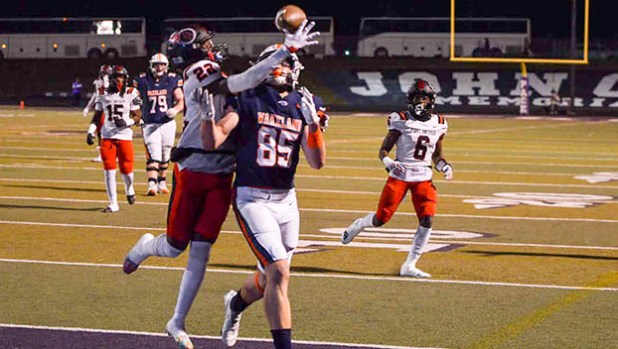 Daevon Iles (22) breaks up a potential touchdown catch in the first half. (Chris Moore/The News) 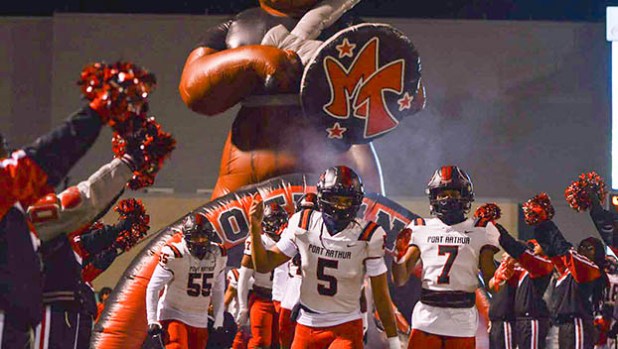 The Titans take the field for the second round playoff game in Lufkin. (Chris Moore/The News) 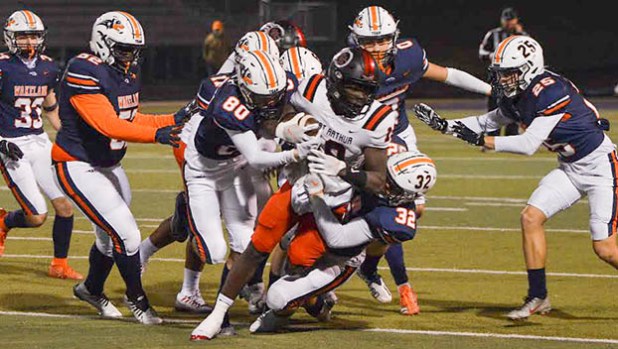 After four overtimes, Memorial emerged victorious with a 52-50 win over Frisco Wakeland in the area round of the 5A-II Division I playoffs in Lufkin Friday.

Titans quarterback Davion Wilson found receiver Ja’Quan Holmes in the corner of the end zone on a two-point conversion to seal the game.

On the previous play, the Titans defense forced a low throw to set up the winning play.

The way the Titans (11-1) forced overtime might have been just as impressive as the win itself. With just under a minute left to play in the fourth quarter, the Titans were down seven points and forced a Wakeland punt, which was returned by receiver Caleb Goodie to the Titans 40.

With 18 seconds left in the game, Wilson found Goodie for a 34-yard score to tie the game, 35-35. The receiver had to out jump multiple defenders to haul in the tying score.

“We just told them to keep playing,” Memorial Coach Brian Morgan said. “We just told the defense to make them snap the ball again. We knew coming into the game they had a good offense. We knew it could be a shootout.”

On the first possession of OT, Memorial running back Ja’coryn Baker put together a highlight reel run, breaking multiple tackles on his way to a 29-yard touchdown.

The Wolverines answered with a score.

Both teams scored in the second overtime but failed to convert the 2-point plays.

The third overtime, which consisted of only 2-point conversion plays, ended with both teams finding the end zone.

“I have never been in four overtimes,” Morgan said. “We had an overtime game a couple of years ago against PNG. This was a back and forth game. Our kids showed a lot of grit. We talked about winning one-possession games in the playoffs. Every game in the playoffs is one possession. The kids kept fighting and playing.”

Both teams started the game hot. The Wolverines wasted little time, scoring two plays into the game to give Wakeland a 7-0 lead. The Titans responded with a more methodical drive that ended with a punishing run by quarterback Davion Wilson to tie the game midway through the first quarter.

Wakeland’s passing offense, once again, proved to be a problem for the Titans defense

The Wolverines offense was overpowering in the first half with more than 300 yards passing and three TDs through the air. The Titans had a hard time stopping Wakeland tight end Tripp Riordan, who recorded 10 catches for 179 yards and two touchdowns in the first half.

But Memorial locked him up in the second, holding him to only 20 more yards for the remainder of the game.

The Titans notched the only score of the third quarter with a 30-yard pass from Wilson to Goodie.

The drought was over in the fourth quarter as both teams combined for four touchdowns.

Wakeland scored on a 7-yard TD to start the period. Memorial answered with a five-play drive capped off with a 2-yard run by Wilson to make the score 28-28 with 7:38 left in the game.

The Wolverines answered with a five-play drive of their own, which ended with a 27-yard pass for a TD.

The Titans’ hopes looked bleak after they failed to convert a fourth and goal play with 3:56 left to play, but would get one more crack at it to set up the Goodie touchdown near the end of regulation.

The game ball goes to… Davion Wilson finished the game 26 of 35 for 357 yards and two TDs. He also had 21 carries for 117 yards and three rushing touchdowns.

The play of the game was… There were plenty to choose from, but Goodie’s TD grab at the end of regulation takes the cake.

Next up… Memorial will take on Longview back at Lufkin next week. The date and time is to be determined.