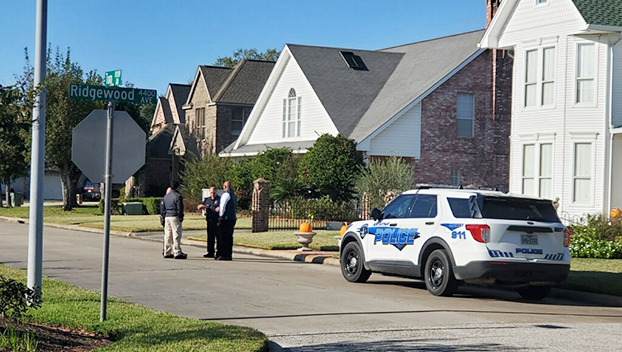 Port Arthur Police Department officers work the scene of a homicide Thursday afternoon, where a 61-year-old man was killed in the 8000 block of Tom Drive. (Mary Meaux/The News)

A 61-year old man is dead after an early afternoon shooting in the north area of the city.

Port Arthur Police Department officers were called to a shooting at 1:10 p.m. Thursday in the 8000 block of Tom Drive. Police and Port Arthur Fire Department responded to the call and found a man injured from the shooting, PAPD Sergeant Ahmaal Bodden said.

The man was taken to the Medical Center of Southeast Texas, where he later died from the gunshot wound.

Bodden said there had been some sort of dispute or disagreement with another person but did not elaborate.

A person of interest has been identified and was being interviewed by police at approximately 3:15 p.m. Thursday.

No arrests had been made as of Thursday afternoon, he said.

The deceased is identified a Charles Quinsenberry, a retired battalion chief with the Port Arthur Fire Department.

PAPD Chief Tim Duriso said there were “no connections” between the victim and person of interest.

One woman said she has been a neighbor to the victim since 1992. While she doesn’t know what transpired, she called it a “sad day.”