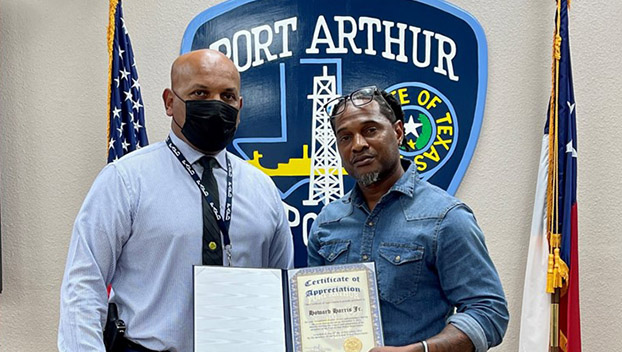 Sometimes a caring individual can make a world of difference.

Howard Harris Jr. was on his way home when he saw a child in the roadway on the night of Nov. 9. He picked the child up and went the extra step by trying to locate the boys’ family through social media.

The Port Arthur Police Department received the call of the wandering child in the 5000 block of Gulfway Drive and when they got there, officers found Harris holding the boy, according to information from PAPD.

Within minutes of Harris reaching out on social media, the child was identified and returned to his family.

Police said the child escaped the home while the family slept.

Duriso, not wanting to wait until a much later date to commend him, called Harris and asked him to come to the police station.

While there, Harris was presented with a certificate of appreciation from the PAPD.

Duriso said Harris was happy to help a child.

The police department’s Facebook post about Harris’ actions had approximately 90 comments this week. Some thanked him for his actions, others called him a good man and said God put him in the right place that night.

One man was happy there are still people with good principles and values. He was also pleased to see PAPD recognize Harris.

Duriso said actions such as Harris’ do happen but a lot of times people don’t want the recognition. Harris, he said, was very reluctant to receive the certificate of appreciation.

But after police spoke with the man and let him know how much they appreciate his actions, he agreed.

“We have great people here in Port Arthur,” Duriso said. “We always ask people to help us, and this is a prime example of what it means to participate in the process.”

It’s actions like this, a good deed such as looking out for a child, that make a difference in the world.

This reminds me of a song from way back when. (After a Google search I learned the song I’m referring to came out the year I was born, 1965).
“What the World Needs Now Is Love,” sung by Jackie DeShannon, is an uplifting tune that is still pertinent all these years later.

And while the world can be an ugly place I’m glad there are those like Howard Harris Jr. who take that extra step to make a difference.