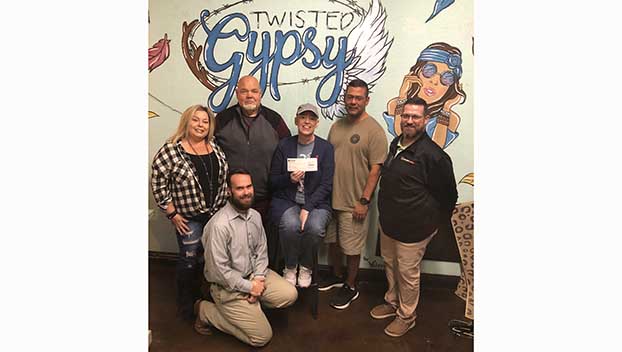 NEDERLAND — From the smile on her face to the jokes that she tells, it’s almost impossible to believe Myndi Munoz is fighting breast cancer.

“Everybody knows somebody that’s been affected by it, so, why not me?” she said. “I’m just as able to get it as everyone else. It’s just a bump in the road.”

But those around her say her easy-going nature and ability to make others laugh is something she’s had long before the cancer.

The couple celebrated their 20th wedding anniversary in July with Myndi undergoing chemotherapy. And she was diagnosed in June while the two were headed to Orlando for vacation.

But the call didn’t stop her from heading to the beach.

“We were driving to Florida when they called,” she said. “But, we already knew. I had Googled, ‘what does cancer look like on an ultrasound?’ So that when I’m watching the ultrasound I can see what it looks like. So I already knew. We were like, might as well go on this vacation and enjoy it while we can. Because when we got back, I had appointments at M.D. Anderson the next week after we got back.”

John said she scheduled doctor appointments through email while on vacation and went back to enjoying the trip.

And as she went through her journey and chronicled it on Facebook, she caught the attention of William and Michael Harris.

Myndi, who has been an educator at Hillcrest Elementary School in Nederland for 24 years, had taught their daughter.

William and Michael, along with Twisted Gypsy owners Evy Knight and Donny Knight, were looking for a person to bless with proceeds raised from their second annual Fashion, Fight and Find a Cure event.

The four held the event in October on Boston Avenue as part of an annual effort to provide for those in need.

“That’s what it’s all about,” Evy said. “You can have so much money. You can have so much power. But if you don’t give back, what’s the use for it? We’re blessed that we found us here, because we basically all think on the same line. We all are driven by the same thing — to help people and help our community.”

“Amazing” was the word she used to describe the October fashion show.

She spoke while surrounded by her husband and their business partners before the four presented Myndi with an $800 check.

“When we saw her story, we knew we had found the person we wanted to find who was local, in the community, supports everyone else and who needs support, too,” Michael said. “We brought it before everyone and unanimously agreed.”

Julie and John voiced great appreciation, speaking of the toll that even things such as fuel and food prices can take when driving back and forth for treatment.

Julie has finished chemo and in December will have a lumpectomy.

“They’ll just take out a piece. But that’s because the chemo worked really, really well,” she said. “It practically melted the tumor. There’s almost nothing for them to take out. After probably three (treatments), I couldn’t feel it anymore. Even the doctor couldn’t feel it.”

As Julie looks forward to a cancer-free life, plans for the next Fashion, Fight and Find a Cure resume. The group is now a registered non-profit.

“This year we were able to secure more corporate sponsors,” William said. “And so we’ve already had some people reach out to us (that) want to help sponsor.

“I want to make it as big as the Cattle Baron’s Ball. I want to fill Ford Park and then some, and keep everything right here in Southeast Texas. We can help families who need it.”

And that, Donny said, is what their mission is all about.

“We want to get to where we can help more people every year,” he said.