See how PNG stacks up against LBJ Austin; coach wants to see improvement 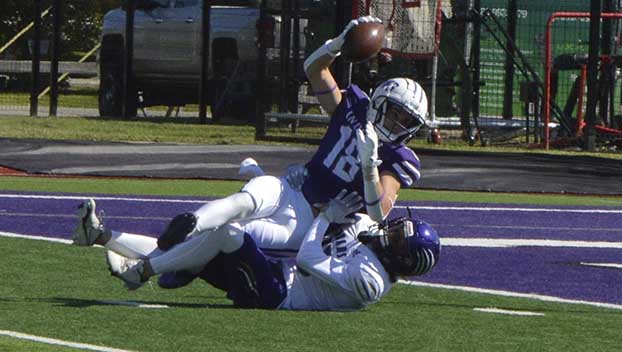 Joseph was hired in February and led the Indians to an 8-2 regular season record and went 6-1 in district play, earning the Indians a No. 2 seed for District 9-5A Division II.

After the game Saturday, Joseph didn’t take too much time to reflect on the moment.

“Playoff wins are awesome,” he said. “I just wish we wouldn’t make it so hard on ourselves. We shot ourselves in the foot in the third quarter. We really put ourselves in bad positions with self-inflicted wounds. We have a lot we have to clean up heading into next week.”

Joseph indicated PNG’s playoff run will be short lived if the team is not able to improve on the mistakes.

It appears the Indians will have little room for error this week when they travel to Katy to take on LBJ Austin in the second round.

The Jaguars (8-2, 6-0) enter the game on a seven-game winning streak, outscoring opponents 455-0 in the last the last six games (including a 69-0 win over Elgin in the first round of the playoffs). LBJ has averaged 76 points per game during that span.

LBJ’s only losses of the season came against 6A Manor and TAPPS school Parish Episcopal. The Jaguars also beat 6A Weiss in their non-district schedule.

Joseph said his team will have to play better than it did against Montgomery to give itself a chance.

After a bit of a stall for the Indians offense to start the first playoff game, PNG was able to get on the board with a strike from Cole Crippen to Landon Guarnere to give the Indians a 7-0 lead.

Montgomery answered with a field goal for its first points of the game.

Later in the half, Crippen found Chance Prosperie for another score to build the Indians lead to 14-3.

On the next drive, the Bears answered back with their first touchdown, but the celebration was short lived after Guarnere returned the kickoff 96 yards for a TD to give PNG a 21-10 lead.

During the game, Prosperie made what might have been the catch of the year. During the first half, Crippen tossed up a 50-50 ball to his No. 1 target, who was in tight coverage. Prosperie reached around the defender, pinning the football against his back and maintained control all the way to the ground, causing the sideline to erupt.

The Bears brought the score within seven points in the third quarter, but late scores by the Indians put the game away. 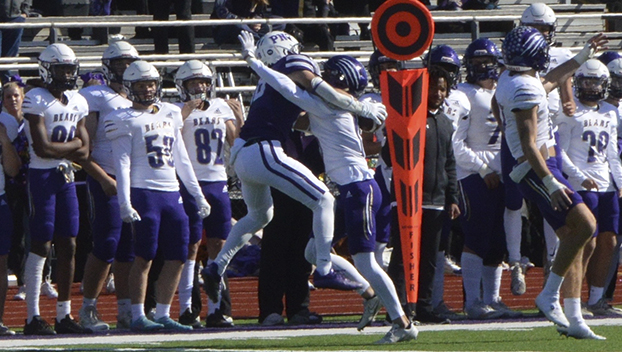 PNG receiver Chance Prosperie makes a ridiculous catch behind the back of a defender. (Chris Moore/The News)