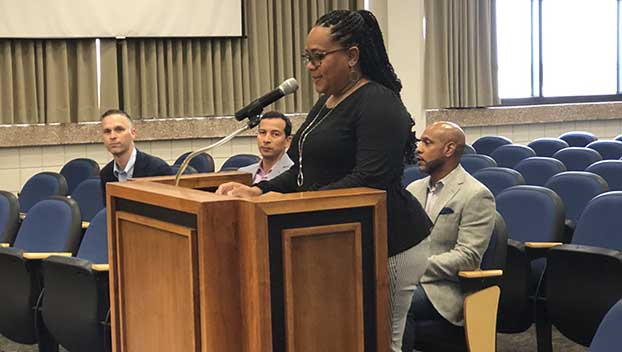 A plan to revitalize Downtown Port Arthur was revisited Monday as city officials continue efforts to beautify and populate the area.

The Tax Increment Reinvestment Zone (TIRZ) No. 1 group met for a workshop to discuss a multitude of topics, one being a Downtown revitalization plan first drafted in 2016.

The original resolution was passed in April 2014, with then-mayor Delores Prince authorizing the engineering firm Freese and Nichols, Inc. to create a Port Arthur Downtown Revitalization Plan that “will focus on how changes to zoning, transportation/circulation, infrastructure, land use, urban design, and redevelopment options have the potential to reshape Downtown and provide an important link between existing neighborhoods and other retail/commercial areas,” according to the original document.

As efforts to revitalize Downtown Port Arthur continued this week as the TIRZ board hosted a stakeholder community workshop to revisit the plan created six years ago.

“The plan was to be used as a policy document to guide public funding and attract private investments while providing the visible framework layout and catalyst actions to promote the Downtown area,” she said. “While the plan’s foundation was based on efforts and accomplishments from the past; its purpose was to provide a forward outlook on market potential, capital improvements and project opportunities that will give Downtown an even more robust and respectable future.”

At the time, funding was to come, in parts, from the Economic Development Corporation and Mardis Gras of Southeast Texas.

The latter relocated to Beaumont in February 2020.

The original study, which was done at a cost not to exceed $731,000, was refined to Houston Avenue at the west, Lake Charles Avenue to the east, 7th Street to the North and the Sabine-Neches Waterway at the south.

Three members from FNI who were part of the original study were in attendance to give reports on overall achievements, as well as complications at the time.

Hector Olmos, who oversaw storm water, gave a report on the pump stations, and said they spent a considerable amount of time studying how the storm water was being taken underground from the streets and which path it takes, or if the rainfall is just so intense it has to find a path above ground.

Some existing infrastructure surpassed its capabilities at more than 50 years old, and most needs to be replaced, he said. In addition, the amount of water now being directed to pump stations is overwhelming.

“Pump station Houston…has to double in capacity, and Shreveport in the middle has to triple its capacity,” Olmos said.

However, as they mentioned, that study was done prior to Tropical Storm Harvey or any improvements made since.

Following questions from TIRZ board members, FNI said they would bring an updated plan before officials in the near future.