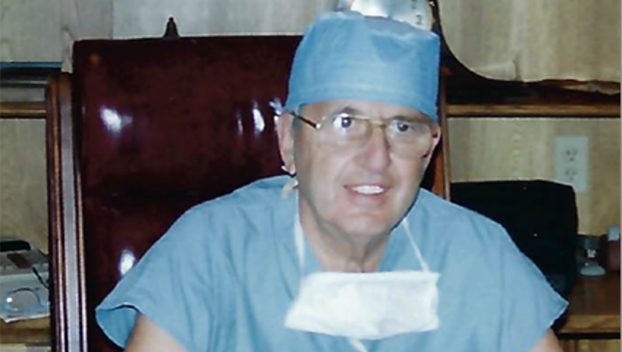 Martin was born on April 27, 1924, to Robert and Esther Haig in Lynn, MA. After graduation from Tufts College in Boston, Martin joined the United States Navy, where he proudly served during World War II, in the Pacific as an Ensign.

He later became an Executive Officer, second in command, on his ship. After the war, Martin returned to Tufts, attending Medical School where he graduated with a medical degree in 1950.

In 1956, Martin arrived in Port Arthur, TX, passing his Boards to become a Board-Certified Orthopedic Surgeon. Over the next 55-years, he dedicated himself to providing care, kindness and compassion to his patients and faithfully served his community.

For over 40-years, Martin volunteered his time at the Hughen Center, site of Bob Hope School and Herbert Adult Center in Port Arthur.

Martin was instrumental in bringing physical and occupational therapies to the Hughen School and told many stories about the wonderful children, and their families with whom he interacted throughout the years.

He was proceeded in death by his father, Robert, his mother, Esther, his sister Virginia Winam, her husband, Frank, and his stepson, Chet Domingue.

Martin is survived by his wife of 30 years, Doris, his daughter Diana, his stepdaughter’s Deanna Elizondo, her husband Rudy, and Donna McPherson, her husband Buster, and 7 grandchildren and 8 great-grandchildren.

Martin’s ‘Celebration of Life’ will be held at Levingston Funeral Home, in Groves, Texas on Saturday, November 19th. Visitation will start at 1:00 PM, with the memorial service starting at 2:00 PM.

In lieu of flowers, the family ask you consider a donation in Martin’s name to The United Methodist Temple or The Hughen Center both located in Port Arthur or the charity of your choice.