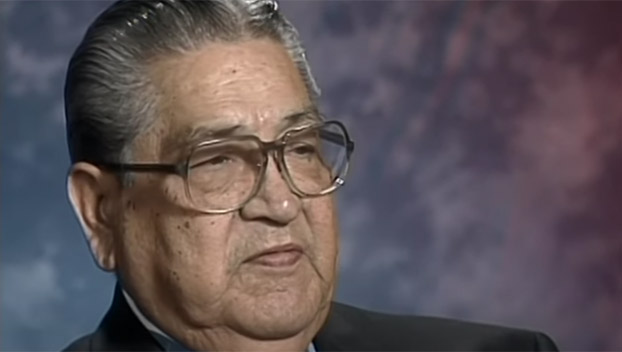 I didn’t realize at first when joining The Port Arthur News that there were longer official names for the city’s elementary schools.

Whether alumni, faculty or students were talking, the schools were always referred to as Adams, Dequeen, Houston, Lakeview, Port Acres, Travis, Tyrrell or Washington.

So it was with that poor assumption, that I’ll never forget the surprise and education I received by attending a Greater Port Arthur Chamber of Commerce event and watching a video presentation on Staff Sergeant Lucian Adams, who graduated from Port Arthur in 1943, served with distinction in WWII and eventually was honored with a school in his name.

What a man. What a legacy.

On Oct. 28, 1944, near Saint-Dié, France, Staff Sergeant Lucian Adams (“the Tornado from Texas”) destroyed three enemy machine-gun positions that were decimating his fellow soldiers. For these actions, he was awarded the Medal of Honor on April 23, 1945.

Adams shared in the video his thrill when receiving a medal at Zeppelin stadium in Germany in the shadow of where Hitler would speak but was now occupied by Allied Forces. One of those men was Port Arthur’s Lucian Adams.

Thinking about Adams this week and trying to focus on Veterans Day at the same time allowed me to share the video Thursday evening with my 14-year-old son.

He was just as impressed as I was a few years before.

It serves as an important reminder that there are amazing stories all around us, and we need only slow down for a few minutes and pay attention.

The Port Arthur Independent School District honored Adams by naming the school for him in 2011.

Lucian Adams is also enshrined as a member of the Museum of the Gulf Coast, Notable People Hall of Fame, where his story in available in person and through the venue’s online website presence.

Talking about Adams this week was an important part of my time with my son, who recently earned the rank of Star in Boy Scouts. He is now two ranks away from his goal Eagle Scout status, a pursuit I find especially thrilling for a young teenager.

It is through the eyes of this next generation that I know the sacrifices and gains made by our Veterans will never be relinquished.

As luck would have it, my job as a community journalist took me to First State Bank of Texas in Orange earlier on Thursday.

There I met Chase Peacock, a 13-year-old student at Little Cypress Junior High.

He is a Boy Scout working to complete his conservation work to earn Life Rank, which is the final stop before Eagle Scout.

In total, he is building three wooden flag retirement boxes for bank branches in Orange, Vidor and Beaumont.

Patrons will be able to drop off worn out or tattered American Flags in those boxes and know they will be disposed of in the correct and respectful manner.

“This is my way of giving back and making sure proper respect is given to our flags, since they represent all the freedoms we have and are a remembrance to soldiers who fought for these freedoms,” he said.

With stories to share like those of Lucian Adams and young people ready to pick up the baton of service, there is a path for a better future.

We just need to pay attention, slow down from time to time and learn about all the greatness that already exists around us.