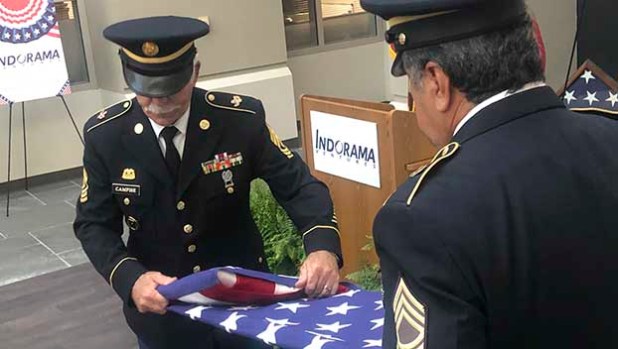 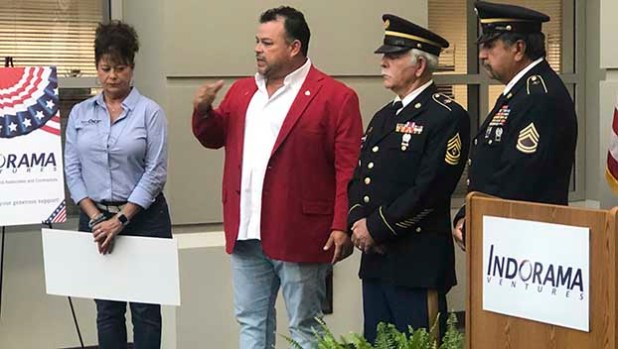 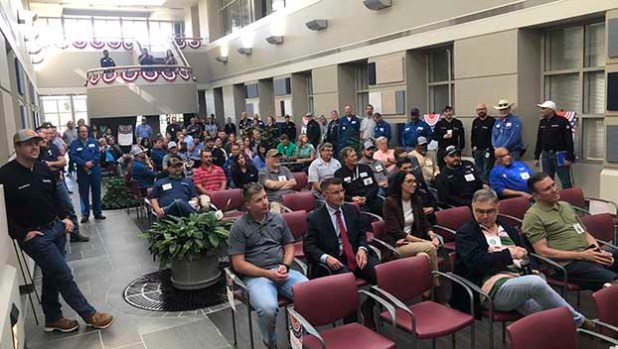 The atrium in the administration building at Indorama Ventures was filled Thursday for the company’s first Veterans Day Celebration. (Monique Batson/The News)

PORT NECHES — Johnny Colunga and Michael Campise sat at the front of Indorama Ventures Oxides LLC Thursday for the company’s first Veterans Day Celebration, preparing to speak to a room full of veterans who worked at the site as well as other community members.

That was, after all, what they had been called to arrive and do.

Except that wasn’t the true purpose at all.

“This is a surprise,” said Kim Hoyt, site director. “They thought they were coming up to teach us how to fold a flag.”

Instead, one by one, 10 groups and businesses from the area presented the two gentlemen with checks for their organization, which totaled $17,000.

“Honestly, we thank you guys for what you do,” said Brian Swindel, owner of Troop Industrial, who served in the U.S. Marine Corps. for 6.5 years and served in Desert Storm. “Being in combat, you realize some things when you get back home because you’ve changed. What we call normal, they’re feeling like a fish out of water. They don’t fit in.”

Swindel said Troop often works with servicemen and women as they return home to help with the adjustment to civilian life.

One, he referenced, had gone as far as to sit in his truck with a pistol on his console in preparation to end his own life.

“He thought about his mom,” Swindel said. “That was just two weeks prior and God put us in his path. We had a moment. We both cried.”

As a global company, representatives said, it’s not always as easy for them to present checks. However, several members stood outside the gate at 4 a.m. one morning as employees arrived, just asking for donations for the program.

It began with Indorama recognizing 36 veterans that work within the company. Each was called to the front, thanked and photographed.

“We are an all-volunteer group and we’re dedicated to providing military honors for our brothers and sisters in arms who have gone before us,” he said. “We do an average of 25 funerals a month. We’ve done as many as 43 in a month. Last year we did 367 funerals. This year we’re at 290, on schedule to do about 350 or 360 again this year.”

Campise said the group also provides a lot of programs for children in school districts such as PNG, Vidor and Mauriceville.

They are looking for volunteers.

“We’ll buy your uniform unless you still have your old one and fit in it,” he said to much laughter. “We’ll purchase your uniform that you last had with your rank and your medals that you received last year.”